When Yuriko investigates increased volcanic activity in the Mt. Fuji area, she learns the story of a modern-day Tarzan named Takeru, who is rumored to live in the region's dense woods since becoming lost within them 15 years ago. Meanwhile underground volcanic energy creates boiling temperatures in a lake at the foot of the mountain and a huge boulder erupts from the waters. Because the rock obstructs a main travel route, it is blasted apart with dynamite and the pieces are transported back into the forest. At one night, the pieces collect around a strange luminescent rock, creating an enormous rock monster called Gorgos that lives and breathes like an animal. While the investigative trio searches for Takeru with the help of his older sister Mitsuko, an area policeman finds him trapped by the monster beneath a fallen tree and helps him to escape. Takeru rushes the others to safety and then confronts the monster alone. Climbing on the creature's back, he is successful in destroying the mysterious glowing orb which functions as the monster's heart and the beast falls over dead. Takeru is reunited with his sister and happily returns to civilization. 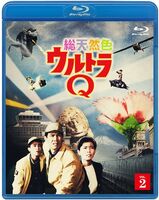