"Earth must be protected by our own hands. Adjutant, you must know this from our predecessors. We can't defeat a monster without Ultraman. Don't ever say that even your life depends on it."

Masaki Nishina
Ryu Aihara (アイハラ・リュウ Aihara Ryū) is the only surviving member from the original CREW GUYS. Ryu was very close with former CREW GUYS captain Kazuya Serizawa, who's supposed death had a great effect on him. He later accepts the new and younger CREW GUYS, and becomes Ultraman Hikari's second host. At the end of the series, he becomes the captain of another CREW GUYS.

When a monster first appeared, GUYS Japan was sent to take care of the monster. This was the first monster attack in nearly 25 years and no one was prepared for what would come in the battle. Dinozaur easily defeated his comrades, and the remainder was only the fighter plane of him and Serizawa. Serizawa, not wanting Ryu to die, ejected his seat. He is a good man but has a cold exterior after what has happened to his friends. When Mirai first meets him, he is reciting the 5 Ultra Pledges and Mirai joins in as well. Later on during Mebius' first battle, he berates Mebius for failing to defend the city and shielding himself with buildings, then he berates himself for failing to protect his friends. He feels responsible for all the new members of GUYS and tries his best to protect them. He habitually recites the 5 Ultra Pledges after learning them from his previous captain. In episode 24, he was captured by Vakishim and his body controlled by Yapool. But luckily, he was freed by Mirai. He was told the history of the country of light by Mirai in episode 30. During Serizawa's final battle as Hikari, Ryu rushes into the battle in a fit of rage at the sight of his former captain being killed. Ryu himself is seemingly killed until it is revealed that Serizawa passed on the Knight Brace to him, allowing him to become Hikari's temporary host. Mirai Hibino/Ultraman Mebius was able to contact him alone in episode 50. Ryu became the new captain of CREW GUYS after episode 50.

When the Darkness Fear was about to crash the Earth, Ryu and Harusaki, his new subordinate were sucked into it. Inside it, Ryu came upon a wast land covered by dark clouds, that reminded him of when Alien Empera attacked Earth. Suddenly, Ryu and Harusaki were attacked from underground by Armored Darkness, who hit the Gun Phoenix Ryu piloted. Ryu ordered Hirusaki to run away while he stayed in Gun Phoenix and tried to attacked Armored Darkness. However, Armored Darkness was too strong for him and he was seemingly killed by Armored Darkness. Harusaki cried after he saw his captain killed, but Mirai (Mebius) arrived and told Harusaki that Ryu was still alive after holding of the giant. Thanks to Ultraman King's power Ryu was saved.

After all the original crew of GUYS Japan came and entered Darkness Fear to helped Ryu, they began to attack and Mirai transform into Mebius. Ryu planed to entered into the body of Armored Darkness to awaken and free Ultraman Hikari. He later joined with Hikari and became Hikari's temporary host again. He teamed up with Mebius to defeated Armored Darkness, but it was too strong. Finally, the two merged with team GUYS and again became Mebius Phoenix Brave. Mebius then overpowered Armored Darkness and destroyed it with the Mebium-Knight Shoot. After the battle Ryu was released from Hikari's body and he was teleported to Earth by Mirai while Hikari used his power to stop the Darkness Fear from crashing into Earth and took it away. 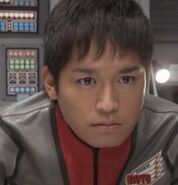