Ultraman 80 episode 50 "Ah! The Giraffes and Elephants Turned to Ice!!"

Yullian took on human form when she traveled to Earth to warn 80 about the arrival of King Galtan. The members of UGM gave her the name 'Ryoko Hoshi', when she was suffering from amnesia. She later joined UGM when its only female member, Emi Jouno, was killed by one of the Alien Galagala. She finally turned back into Yullian in episode 49 of Ultraman 80.

Bright Bracelet: Ryoko can use this to transform back into her Ultra form. Her transformation scene is similar to 80's first, she lifts her right arm into the air and shouts "Yullian!", light covers her body and transforms her into Yullian 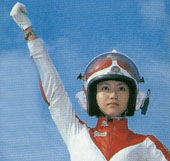 Ryoko in her UGM uniform

Takeshi & Ryoko turning back to their Ultra form