―Ryo answering Gondo after he questioning Asuka/Dyna's will to protect them.

Some time ago, Ryo had lost her parents in an accident. Due to her being the only child in her family, she was adopted by her relatives as a foster child. Ultraman Dyna: Zero Drive Towards Tomorrow

Back in her childhood, she befriended a weak-willed boy named Hirao Teruhisa, as she always keeps motivating him to overcome his fears of bullies by accepting their fight and push Hirao to the limit every time he was in despair.

Ryo was among the rookies of Air Force Squad ZERO and was sent to assist GUTS in battling Shibito Zoiger armies.

After finishing her training, she was recruited to the Super GUTS and even became the instructor of Air Force Squad ZERO. One day, she and Hiniki were sent to test the cadets as part of the Super GUTS recruition exam. Each were riding GUTS Wings only with different modellings and color schemes to distinguish between the rookies and instructors. As each trainee is hit, they are required to leave the battle. Asuka manages to evade both testers, scoring hits on both of their vehicles. At that moment, a large glowing sphere appears nearby. It splits into multiple smaller spheres, and begins attacking the nearby space station and the smaller craft. Ryo's weapons jam after taking some damage, but Asuka rescues her. In the process, though, his ship is destroyed, though Asuka manages to get his breathing mask on in time to eject.

Super GUTS dispatched to the TPC Mars Base's defense against Darambia. At that moment, a new Ultra appeared. Some of the older members of the TPC contingent in the colony believe it is Ultraman Tiga, returned and renewed. The elder officers, however, realize that it isn't Tiga, but may be another guardian like him. Nonetheless, the Ultra defeated Darambia. After its battle with Giralen, most of the Super GUTS members debated to named him and Mai wins, naming him Ultraman Dyna.

Ryo's temper was put to test due to Asuka's goof ball antics and recklessness causing her to always yell at him, even developing a pilot rivalry. However, as the series progress, she grew patient due to Asuka's grew mature of himself even harbouring feelings for each others, which becomes quite clear toward the end.

One day, both Asuka and Ryo were captured by Black Buster Corps led by TPC Staff Gondo while on a journey to Mars. He revealed to Ryo about Asuka's alter-ego as Dyna and his planned to used him to create Terranoid. Despite its success, due to his careless spending of energy, his color timer soon began to blink and he soon fell. Because there were still a few more Spheres left, the Spheres morphed him into his next form, Zeglanoid and attacked the TPC Mars Base.

Zeluganoid then began to wreak havoc upon his creators. Ryo tried to brought Asuka to safety but the latter refuse to give up, almost killing himself in the process by transformed into Dyna to fight the monster. But due to his previous drain of light energy, his color timer quickly flashed. Just then, Super GUTS arrived and also attacked the beast. Watching the battle from underground is Ryo and Gondo himself. Ryo then headed towards the "life-force extracting device" to lock herself in and sacrifice her energy so Asuka can live when he un-transforms. Seeing this as an opportunity to redeemed from his mistake, Gondo throw Ryo aside from the device and lock himself in. He then switched the machine on to max frequency and turned it on. Gondo bids farewell to Ryo and performs Asuka's signature thumb up. In a flash of yellow light, the machine exploded, and Gondo became energy, which was then transferred into Dyna. With renewed strength, Dyna managed to turn the tables and defeated Zeluganoid. Soon, Zeglanoid exploded, and the base was safe. However, Ultraman Dyna has also then vanished with Zeglanoid after the battle with what's left was the Lieflasher, much to Ryo's dismay.

Reika, the last surviving member of Black Buster Corps guided Ryo to Daigo's home where Asuka was sheltered. She gave Ryo her GUTS Shadow in order for her to return to her teammates. Once arrived at the moon where Clarkov NF-3000 parked, she joined in the battle against Neo Gaigareid along with Asuka/Dyna. But as the Super GUTS via Clarkov about to attack, Neo Gaigareid used his grapple claw to take Ryo in a fighter hostage and escaped inside Gransphire as it was consuming the planetoid. However, Dyna managed to save Ryo from Neo Gaigareid, allowing Super GUTS to fire a special laser that destroyed him, but not Gransphire.

Back in the Clarkov, Asuka's secret was no longer made a secret though everyone accepted it. Arranging a new plan, they used the Clarkov to fire the Neo Maxima Cannon to cleared the path to allow Dyna to target Gransphire. Asuka/Dyna succeeded in the mission, but the victory turns somber due to Asuka being sucked into the wormhole. Along with the others, they believe that Asuka still alive and set on a journey to the Ultra Star.

15 years later, Ryo would be promoted to the Super GUTS captain with Hibiki and Kohda were in charge of TPC. As she witnessed Taiga's battle against a fleet of Sphere, she panicked when he was missing in action. After Super GUTS tried to detect the latter multiple times, Asuka appeared, briefly returned to his universe where he inform them of Taiga's whereabouts. Ryo promises Asuka that they will catch up to him one day, and Asuka smiles, giving a thumbs up, saying that he will be waiting for them before continuing his journey through space.

In this film, Ryo was Asuka's coworker whom supported him in his dreams. After Asuka's battle as Dyna along with Ultras against Black Shadow and their minions were over, Ryo witnessed Asuka's success in his victory in a baseball match. She was among Daigo's passengers that rode a spaceship where everyone makes their way to M78. 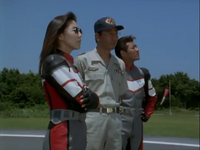 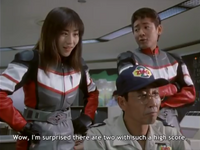 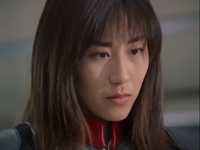 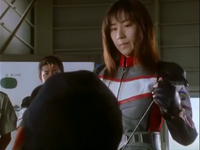 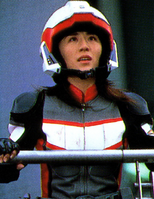 The childhood version of Ryo Yumimura. 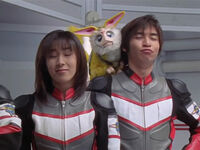 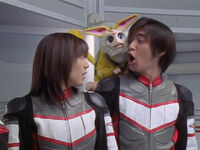 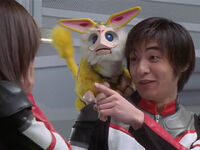 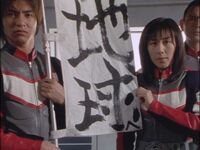 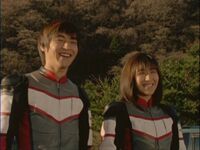 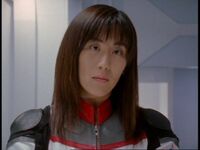 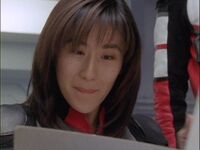 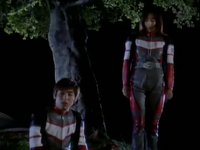 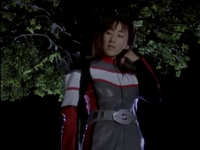 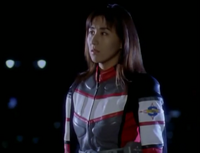 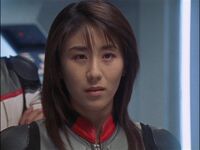 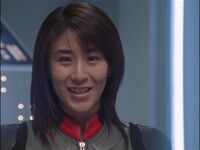