Residents of the Land of Light
Ultraman Ace

TBA
Rutia (ルティア Rutia), also spelled as Lutia, is a female Ultra introduced in the Ultraman Story 0 manga, she was the childhood friend of Ultraman Ace and potentially a love interest.

A childhood friend of Ace, as children Rutia and Ace once fell over a cliff while playing. While danging from Ace's hand, the young boy could barely hold his grip on the rock face, refusing to save himself despite her pleas. Luckily for the two Zoffy found them and held on to them until help could arrive to lift the pair to safety. Rutia and Ace were eversince that day and Zoffy gained a scar on the palm of his hand to remind him of that day. Ace grew to be Zoffy apprentice and it was just after one of those training session that Ace and Rutia were both hit by light from the Plasma Sun and transformed into Ultras.

She was later assimilated into a Remodeled Ultra, and betrayed Ace to their master, shooting him in the back and knocking him out. The other captured Ultras took Ace and Rutia sent out another Ultra S.O.S. to lure more Ultras to the trap. As Ace was being remodelled Rutia was revealed to be the central processor for the construct they were being connected to. It then that Zoffy appeared, having followed the Ultra Sign and had launched an attack on the facility. Ace was freed and the to began to fight their way through the facility but Ace paused when it came to destroying Rutia. To save Ace, she ripped out her color timer, giving her light to Ace who went on to destroy the facility, which turned out to be a stranded ship. Her soul later manifested itself and resided in Ace's own color timer, Ace gained his second Ultra Ring from her. 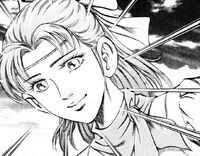 Retrieved from "https://ultra.fandom.com/wiki/Rutia_(Story_0)?oldid=512401"
Community content is available under CC-BY-SA unless otherwise noted.