Yu Koyanagi
Run (ラン Ran) is the main protagonist of the movie Ultraman Zero The Movie: Super Deciding Fight! The Belial Galactic Empire. He is the first human host of Ultraman Zero. However for much of the movie, he was in a coma so his body was controlled by Zero's consciousness, waking up only after Zero separated from him at the end of the movie. He is portrayed by Yu Koyanagi, who is a member of the Ultraman Foundation.

He and little brother Nao, served as the 'police' of their small mining colony were they fought to protect their home from Belial's army of Legionoids. After a tough battle Run was critically injured saving his little brother and the pair were ultimately saved by the arrival of Zero. While Nao immediately mistook the Ultra for Darklops, Run calmed down his brother as he saw the obvious difference. With Run close to death and Zero running out of energy because he couldn't process the light from that universe's suns, both merged to save each other. However to Zero's surprise, he was in complete control of Run's body as the young man had slipped into a coma. After Belial's defeat, Zero separates Run and gave him his life force. Despite he didn't remember what happened back then, he finally reunited with his little brother and met Princess Esmeralda for the first time.

Ultra Zero Eye: Run can use the Ultra Eye to transform into Ultraman Zero. It is generally first summoned from the Ultra Zero Bracelet that appears on Zero's host and his Ultra form. Upon use the rise scene is similar to his father, except a full body shot of his host is seen as light particles gathering to transform him into Zero followed by his Zero Sluggers and appearing and resting on his head.

Run's third transformation
Add a photo to this gallery

Run and Nao saved by Zero

Run and Nao looking at Zero 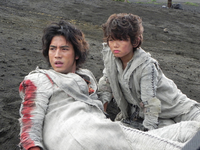 Run and Zero merger as one form

Run using the Ultra Zero Eye
Add a photo to this gallery
Retrieved from "https://ultra.fandom.com/wiki/Run?oldid=524982"
Community content is available under CC-BY-SA unless otherwise noted.