A long time ago, when Gargorgon attacked Alien Gold tE-rU's planet, a fleet of Rudians tried to defend their city on that planet, but Gargorgon defeated them all. tE-rU then picked up one of the Rudian Spark Dolls and left under orders from his ancestors to ensure the energy of Planet Gold not to fall under Gargorgon's hands.

Later on Earth, after he remembered what happened in the past, glowed gold, and attracted the attention of normal citizens, the police, and the Xio, tE-rU used his powers to charge the Spark Doll with enough energy to turn back into Rudian. tE-rU piloted Rudian to attack a strange monument but tE-rU fainted and accidentally caused Rudian to attack area T-94 before Daichi transformed into Ultraman X and literally threw him away to avoid harming innocent citizens. Soon, the robot, not knowing his owner is unconscious, activated its autopilot mode and fought X. Eventually, X realized Alien Gold wanted to get to that monument because its really his spaceship in disguise. tE-rU eventually woke up, deactivated Rudian before it can shoot down the Sky Musketty, and the robot was turned back into a Spark Doll.

When Gargorgon appeared on Earth, Daichi, knowing tE-rU's intentions were pure, gave the Alien Gold back Rudian's Spark Doll and then he used his powers to reactivate Rudian and joined forces with X to take him down. Rudian distracted Gargorgon with his miniguns and the latter X activated his Cyber Eleking Armor and fired his Eleking Electric Shockwave at her which may have scored a direct hit, but she got back up and got the advantage over both the machine and the Ultra with her lightning and tail attacks then used her shoulder heads to grab X and kept hitting him with her claws but Rudian managed to fire a couple of missiles to make her let go of X. Eventually she got mad and fired her Petrification Ray at Rudian, but X took the attack for him and got turned to stone in the process but not before X fired an energy blast at Gargorgon making her retreat 400 m away from Earth. The Man With the Memories of a Planet

After Gargorgon destroyed the missiles Xio tried to destroy her with, she traveled back to Earth after Rudian and the Xio patrol vehicles showed up to confront her, but Gargorgon dominated over Rudian after firing their weapons at each other. She was about to suck up all of the energy from Planet Gold and turn both Rudian and Alien Gold tE-rU to stone, but then Wataru, Hayato, and Asuna fired their Ultlasers at Gargorgon's hidden eye, injured it and reverted all of Gargorgon's stone victims back to normal.

After being turned back from stone, X fought Gargorgon once more and started the fight by gaining the upper hand in combat and getting her away from Rudian long enough for him to be turned back to normal. They fired energy blasts and minigun ammo at Gargorgon, but she brought up a dust cloud to cancel out the attacks and regenerated his injured eye. After X summoned his Cyber Bemstar Armor, absorbed Gargorgon's Petrification Ray and fired it back her and turned her to stone, Rudian finished her off once and for all by firing his energy bullets at Gargorgon until she finally exploded, ended her threat on the universe once and for all. An Oath Beyond Worlds

Rudian reappeared in the final episode of Ultraman X as a Cyber Card. After Ultraman X spoke out to Gomora and stroked Greeza right in the center of his chest, Rudian, along with all of the other Cyber Cards, traveled to X and united with him. Cyber Rudian's power was used to help form the Hybrid Armor and power up the Ultimate Xanadium to defeat Greeza once and for all. Rudian, along with the numerous other Cyber Cards and Spark Dolls, then appeared and thanked Daichi as he thanked them. The Rainbow Land

Rudian is the Spark Doll created and under ownership from Alien Gold race. This item was sent to tE-rU as the final line of defense against Gargorgon. Of course, as mentioned above, this monster is naturally a Spark Doll.

tE-rU as the main pilot. 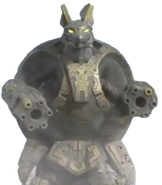