Long ago when Planet L77 was intact, Ultraman Leo once used to have a pet known as Ron, a tiny purple lizard-like creature whom he used to play with day-in and day-out.

That was, until L77's eventual destruction by the Alien Magma, where both Ultra and monster were separated. Leo headed to Earth to save Ultraseven from Alien Magma, while Ron wandered through space, where he became a giant monster, crazed with a thirst for magma.

Sometime later, Ron came to earth in a burning comet and immediately began to rampage looking for magma to feed on, prompting MAC into taking action against the monster. When Gen recognized Ron after briefly battling the monster, he went into a trance-like state reminiscing of their past, completely forgetting about the fact that Ron had torched the engine of their ship with his fire, causing it to veer out of control and crash. Luckily, Gen was able to escape by ejecting at the last second, but Ron, however, burrowed away, and Gen is scornfully scolded by the other angry MAC members.

The next day, Ron emerged from the side of a volcano, a long and strenuous battle ensured between MAC and the monster until Gen as Ultraman Leo appeared. Ultraman Leo convinced Ron to leave Earth peacefully and find a new home so that way no harm could come to either Ron or humanity.

However, the magma-crazed monster attacked his owner, hoping to feed on more magma instead. Leo fought back for a while against Ron until the monster became dazed after several blows to the head. Leo then approached Ron, placed his hand on his head, and introduced his Calming Ray ability on Ron, regaining Ron’s memory and control. Ultraman Leo used the ray again and shrunk Ron down; back to his original form. Then after sealing Ron inside of the green gem inside his head, Ultraman Leo flew away. It was later revealed that Leo gave Ron his own disguise in the form of a dog, allowing him to live on Earth peacefully. 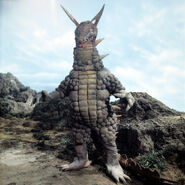 A Ron figure made by Bullmark 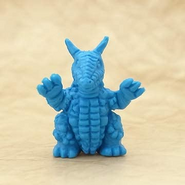