Rolan (ローラン Rōran) is a monster that appeared in episode 30 of the TV series, Ultraman Leo.

Rolan was a peaceful monster that lived in solitude in space, also well known for her beauty (as the narrator said that she was the most beautiful monster in the universe). As she landed on Earth, she was confronted by Alien Magma, who demanded that she marry him. Rolan refused to marry Alien Magma, and the two began to battle. During the fight, Alien Magma fired spears at Rolan's leg, injuring her. Ultraman Leo quickly arrived on the scene and drove the evil alien away. Rolan, who was still crippled, managed to have her injury treated by a young boy who noticed that Rolan was in pain.

Upon recovering, Rolan took the form of a human named Hoshimura and thus befriended the boy and several other children who heard of her and she presented them with gifts: Pinwheels handcrafted by herself. Alien Magma however had unfinished business with Rolan and thus began to stalk the children Rolan befriended. Realizing that the children weren't safe so long as she was on Earth, Rolan confronted the alien yet again and the two battled again. Alien Magma managed to gain the upper hand quickly in the fight, but again Ultraman Leo showed up, and using his superior Martial Arts, killed Alien Magma with one of Rolan's pinwheels by impaling the alien in the chest.

With Alien Magma now gone, Rolan was free to return to her home in space, but not before presenting the children she loved with pinwheels, as a parting gift to all of them for their kindness to her. 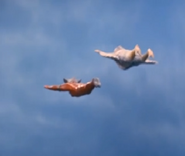 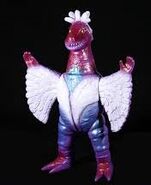 Figure of Rolan by Marmit (?) 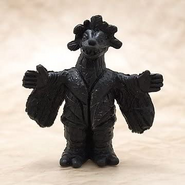