A group of punks who were teasing a group of people in a slow car when they were suddenly overcome with fright. Rodera blocked their path and proceeded to melt the road with its acid. The family that was teased saw a series of mirages that they thought were the monster but they did not believe it. However, they soon saw an acid tornado that melted their car but left them unharmed and melted another truck afterwards.

The attack team ZAT came to investigate and realize that the monster Rodera is located 20 meters underneath the black smoke but can't attack it since the scene was crowded. To make matters worse, a mother decided to use the monster's rampage to her advantage to get rid of abandoned cars for their compensation so the team blocked the roads heading towards the scene but the tornado disappeared, and afterwards, a part of the road turns into a sinkhole and Rodera finally shows himself.

The defense force attacks the monster with missiles and laser beams, but their attacks became useless against the monster's hide and it fought back by firing it's acid at the vehicles, eating away at them.

Just when all hope seemed lost, Izumi Moriyama, appeared on the ground with her new Koshui Gun, a weapon that could fire a concentrated mixture of hydrochloric and nitric acid to use against the monster, but it proved to be as ineffective as the other weapons. The mother tried to reason with the monster but it sucked her up. Her husband than used the monster's weapon to his advantage to rescue her.

Kotaro Higashi then came up with a plan. Along with the other members of ZAT, he repurposed a tree into a rudimentary slingshot and used it to launch himself onto Rodera's head. He then used a bamboo weapon to stab away at Rodera's eye, eventually destroying it. In bouts of pain, Rodera dislodged everyone off his head, and Kotaro took the opportunity to transform into Ultraman Taro. After saving the couple, the Ultra faced the monster head-on.

Even though Rodera had the advantage against the Ultra in combat and acid spraying, Taro used his Foot Beam to blow off the monster's arms and head, but they just flew off and electrocuted the Ultra before they reformed back with the body. Rodera had the advantage again and sprayed Taro with acid but the hero kicked his snout off and evened out his energy stream with his Strium Beam and finished him off once and for all with his Ultra Spout. After he was destroyed, Rodera was split into pieces and a lot of mini cars fell out of its stomach. 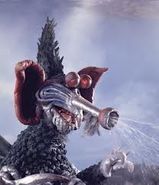 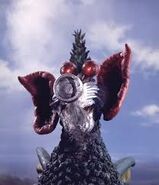 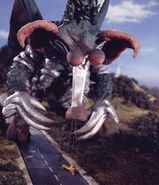 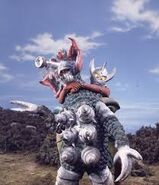 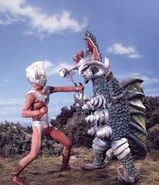 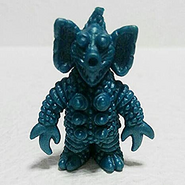