None
Rock Eater (ロックイーター Rokkuītā) is one of the monsters that appeared in Ultraman Neos.

While investigating a nearby island for a lost professor, the HEART team accidentally stumbled upon the Rock Eater species. Luckily for them, the good professor was close by with his friend Bamos. Together, the team and Bamos were able to kill and scare away the hordes of reptiles. Unfortunately when dawn broke the next day, a giant Rock Eater was on the prowl. The creature attacked with little care and severely injured the good doctor. This act of violence drove Bamos to become enraged and made it grow into King Bamos!

The hairy giant attacked like a hunter, killing the red and black dinosaur with little effort. Yet even this did not quench the monster's lust. This now left an even more deadly monster for Ultraman Neos to face. 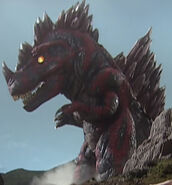 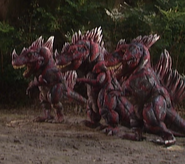