"Your ancestors were once in command of this planet, too. According to my memory machine, it was approximately 2000 years ago. Soon after they arrived here, they created our ancestors, exquisitely built robots. It wasn't long before man got lazy, and the robots took control of this planet. So, robots took over and mankind got enslaved."

None
Robot Chief (ロボット長官 Robotto Chokan), also known as the Robot Commander, is the leader of the People of the Fourth Planet that first appeared in Ultraseven episode 43 "Nightmare on Planet 4."

2000 years ago, the People of the Fourth Planet lived in a modern world where robots and other advanced technologies did their works but as time passed the People of the Fourth Planet became lazier due to endless luxuries provided by their technology, thus making the robots rebel and take control of their planet with the Robot Chief, became the planet's ruler and oppressing the humans (e.g. if a person involved in a hit-and-run accident, the victim will be listed as the culprit).

On Earth, Dan and Soga of Ultra Guard were sent to test a new rocket named Scorpion, which could travel out of the solar system. They rode into the rocket and blast off while falling asleep. However, a malfunction happened when the Robot Chief hacked their rocket's programming and dragged it to the Fourth Planet. As Dan and Soga explored the planet after awakened, they saw a gas station and a harbour but with different logos. Spotting a public phone, they tried to contact the TDF but to no avail. Then, they notice a boy on his bike as he almost gets run over by a truck by a military looking man with a cigar in his mouth. Dan tried to tell him that the boy was almost ran over but he said that boy should have been more alert. Then the man had them arrested and escorted them to a building, where they talked to the Robot Chief. As they walked they notice that a studio was making a gangster movie. The military man brought them to their leader, Robot Chief where he explained the planet's history while scolding his assistant for a different taste of coffee.

After the conversation, they sent Dan and Soga away but not before the woman slipped a note on Dan's helmet, written "They're going to kill you. Flee! Your Earth is in danger! ". After a tour to the gadgets and technologies that the robots used, the party get to the movie studio. Dan realized the human actors in the gangster movie were really killed because the robots used lived rounds. The robots did this as a punishment for them due to their political involvements and to make the movie look lively.

While Robot Chief and his second-in-command let down their guards, Dan and Soga made their escape with the help of Robot Chief's assistant (whom revealed to be the sister of the child that Dan and Soga rescued earlier) as she tried to hide them among the other Fourth Planet humans but instead getting her and a man caught and dragged away for execution. Just as it was about to begin, Dan and Soga lead an attack but got caught themselves. Dan quickly changed into Ultraseven and destroyed the whole building along side the Robot Chief and the Robot Commissioner. He quickly destroyed all of the Fourth Planet invasion armies and the robots. Dan and Soga finally liberated the Fourth Planet and went back to Earth safely but the rest Ultra Guard never believed their story, thinking it as a dream they received during their space hibernation. 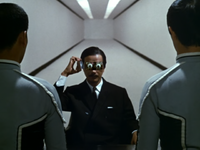 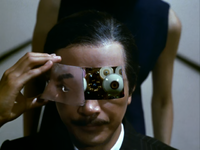 Robot Chief and Robot Commisioner standing in a movie studio 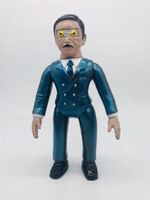 Robot Chief by Marmit
Add a photo to this gallery
Retrieved from "https://ultra.fandom.com/wiki/Robot_Chief?oldid=541111"
Community content is available under CC-BY-SA unless otherwise noted.