Roars & voice:
Roberuga (ロベルガー Roberugā) is a saucer-like Kaiju that appeared in episode 31 of Ultraman Mebius. Though not an official member of Black Directive's Saucer Beasts, Roberuga formed from the wreckage of Black Star in the years following its destruction, making it the latest generation of Saucer Monster formed by the planet, if in an indirect way.

Created by a debris from the destroyed Black Star, Roberuga was sent by Alien Empera to hunt Ultraman Mebius.

GUYS was alerted to an unusual occurrence; five of the orbiting satellites around Japan have been destroyed by some kind of energy blast! Just then, a glowing, disk-shaped object began hovering in Tokyo, as well as a few other major cities all over the world! Soon, one of the objects headed straight for Tokyo ground, and turned into a small disk-like creature with three tiny legs on each side, and began attacking the area by emitting fireballs at buildings.

It eventually turned into a large, two-legged alien, and began unleashing eye blasts at the ground. GUYS was soon sent out to attack, but their weapons were useless. As it fought them, it kept muttering "Obliterate, Ultraman Mebius" over and over again. Soon, Mirai and Ryu tried to attack from the ground, but it was useless as well. Mirai decided to assume his Ultra form, and battled the invader. Mebius and Roberuga seemed evenly matched, but Mebius was losing stamina, while Roberuga fought him off, and just kept saying "Obliterate, Ultraman Mebius." Then, he unleashed a barrage of energy blasts from his eye and hands. Mebius tried to block them, but was quickly overpowered, knocked down, and bombarded while on the ground. His attack, however, was halted by none other than Fire Windom!

The capsule monster and the invader fought hard, with Fire Windom actually fighting very well. Roberuga eventually tossed Fire Windom to the ground, but GUYS stepped in, and attacked Roberuga with all of their weapons, refusing to allow him to hurt Mebius. Fire Windom got up again and joined the fray; blasting away with his fire cannon. Mebius eventually got up, and managed to assume his Mebius Burning Brave form. Roberuga tried to attack with more energy blast, but Mebius used the Mebium Burst, blew through his attacks, and destroyed him completely. The remaining UFO's all flew away, hopefully to never return. Thoughts of Friends

Another creation from Alien Empera was flying straight toward the Earth in its saucer form to fight and kill Ultraman Mebius, but it was being chased by a glowing light. As they both entered Earth and neared the land below, the glowing light shot a green energy bolt, lined with green energy rings at Roberuga, causing it to stumble. It assumed its normal form and landed on a tropical island. The glowing took form, touched down, and stood firm; it was none other than the same Ultraman who had left Earth 25 years ago; Ultraman 80!

80 leapt at Roberuga, punching and kicking with much skill. However, Roberuga quickly turned the tables as it let loose with its "all-out strike" attack method; shooting countless energy bombs and eye blasts, seemingly without end. As 80 got up from the ground, Roberuga landed right in front of him, and began to knock him every which way before grappling with him, and blasting him at point-blank range with its eye blast. Roberuga continued the fight with more of its "all-out strike," until a large, glowing orb of light struck him down; Ultraman Mebius had to come to help!

The two double-teamed Roberuga, but still found it difficult. As Roberuga took to the sky and began blasting more energy bombs, 80 created his Ultra Ray Lance, and tossed it at Roberuga, piercing straight through him! As Roberuga wailed in agony, 80 used his Succium Beam, and Mebius combined it with his Mebium Shoot, and together they destroyed Roberuga. Teacher's Memories

After Saramandora was destroyed by GUYS three more monsters appeared out of nowhere with Roberuga being one of them. After some quick analyzing GUYS found out that the monsters were revived by a dark sphere like Alien Empera's and that it would destroy the Earth if it rammed into it. After Mukadender was destroyed GUYS sent Fire Windom to take care of Roberuga and presumably destroyed him. Ultraman Mebius Gaiden: Armored Darkness

Roberuga reappeared in the movie Mega Monster Battle: Ultra Galaxy Legends The Movie, as one of Ultraman Belial's 100 Monster Army against the Ultra Warriors. He was first seen as one of the spirits emanating to the Plasma Spark's presence along with Arstron, Fire Golza, King Pandon, Alien Metron, and Gudon. He teamed up with Mukadender, Froguros (B), Gromite, Angross, Lunaticks, Jasyuline, Alien Valky, Kelbim, and Birdon to take on Ultraman Mebius. When Reimon and Gomora entered their Burst mode thanks to Belial, he and the other surviving monsters stood back to watch Gomora fight the Ultras. He was killed by Ultraman Zero's Emerium Slash when he arrived along with Kelbim and Hoe.

Roberuga appeared in Ultraman Ginga as a Spark Doll. It is likely that Roberuga returned to space in his original form after Ultraman Ginga defeated Dark Lugiel.

Roberuga was released in 2013 as part of the Ultra Monster 500 Series as #39 in the series. He stands at 5in tall and very accurate look but, with no red on the parts in his head. He has 3 points of articualtion. 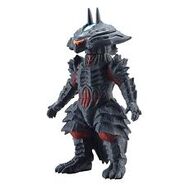 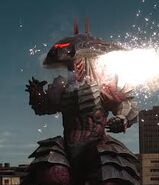 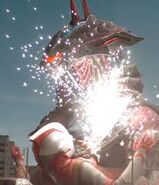 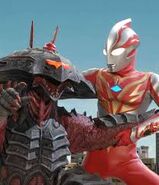 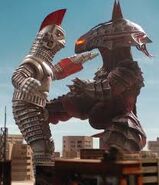 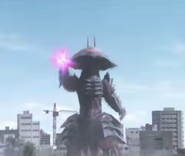 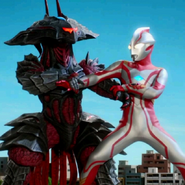 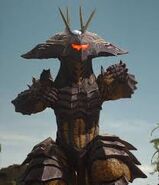 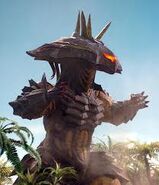 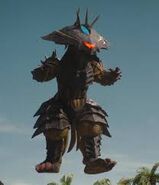 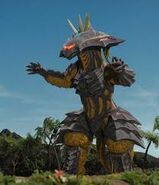 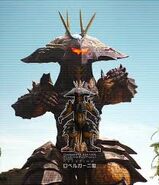 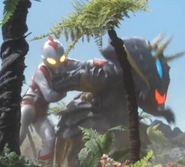 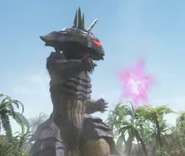 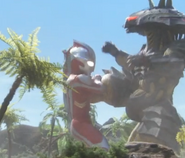 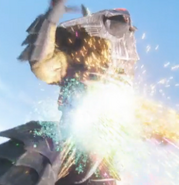 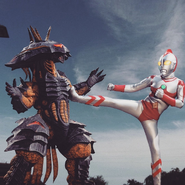 Far behind besides Zoa Muruchi 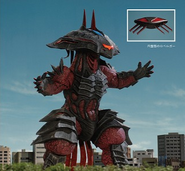 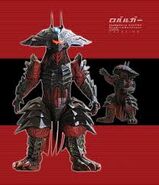