"Unleash the greatest power in the universe!"

"The light of the galaxy is calling me!"

In use (Geed and Zero)
Unknown, presumably lost (Kei and Belial)

Four known copies exist, with the one being used by Riku dedicatedly named the Geed Riser (ジードライザー Jīdo Raizā) in correspondence to his Ultraman alter-ego.

The Riser was among the devices in the Land of Light which was created by Ultraman Hikari alongside the Ultra Capsules. Welcome to the Secret Base After the Crisis Impact, they were stolen by an Alien Sturm named Kei Fukuide. Salaryman Zero The Geed Identity The Fragments of Hope On Earth, his first Fusion Rise is hinted to be Skull Gomora as he attacked the foothills of Mt. Mitsuse and killed all but a host of Little Star. The Sword of an Oath

Another Riser was purposely left behind as part of Kei and Belial's plans to bring forth an Ultraman of their own. The child of Belial, Riku Asakura received it from RE.M. after recently losing his original home and named both his Riser and Ultraman form as Geed. Unfortunately little did he know is that he was used to further the progress of Kei and Belial's plan in obtaining 8 Ultra Capsules. The Geed Identity

When Leito and the newly revived Ultraman Zero joins Geed's battle against a Galactron summoned by Kei, Ultraman Hikari appears and granted the former two a third Riser along with the New Generation Capsules to grant them the ability for Zero to transform into Zero Beyond. Going Beyond Fate

Ultraman Belial would utilize his own Riser to scan Zogu Second Form and Five King Kaiju Capsules at will in order to transform into Chimeraberus. The First Day of the End of the World He would use it again to assume his Atrocious form not long after absorbing Kei's sturm organ. The Sturm's Light

Following Ultraman Belial and Kei's defeat, it's unknown what happened to their Risers, though remaining two still in possession of both Riku and Ultraman Zero.

During Ultraman Geed's fight with the revived Gillvalis, an attack from the AI caught Geed off guard whilst he was attempting to transform into Ultimate Final. This attack ended up critically damaging the Riser, leaving Riku unable to access his Fusion Rise forms. However, Pega soon arrived with a gift from Ultraman Hikari: the Z Riser. This new device allowed Geed to transform into his new Galaxy Rising form, and he resumed his pursuit of Gillvalis, eventually landing on the Earth where Haruki Natsukawa, the current human host of Ultraman Z resided. The Man Returns! Eventually, his Geed Riser got fixed thanks to Ultraman Hikari and Riku is now able to access his Fusion Rise forms again. A Warrior's Duty

The user activates the Ultra Capsules/Kaiju Capsules' switches before sliding them into the Loading Knuckle (装填ナックル Sōten Nakkuru). Afterwards, the user slides the Loading Knuckle to the Geed Riser as they press the trigger, causing the DNA-themed cylinder to spin. This results in a Fusion Rise (フュージョンライズ Fyūjon Raizu) of Geed's forms or a Belial Fusion Monster (ベリアル融合獣 Beriaru Yūgō-jū), while the background sound can be heard during the transformation. For the Fusion Rise version, an Intro music of the Ultraman Series is played, with a remixed or renewed sound (Only applied for the In-Series), while the Fusion Monsters version plays the Belial's theme. [2] 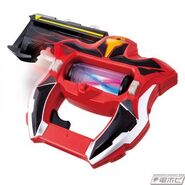 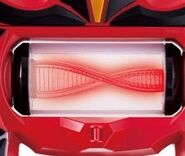 The DNA-themed cylinder shines and spins

Zero Mode (ゼロモード Zero Mōdo) is the form of Riser after attaching the Ultra Zero Eye NEO on the cylinder part of it. Further added with the scanning of New Generation Capsules Alpha and Beta, this allows its user, Leito, to perform Neo Fusion Rise (ネオ・フュージョンライズ Neo Fyūjon Raizu) and transform Ultraman Zero into Ultraman Zero Beyond. 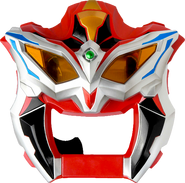 The DX Geed Riser has sounds for fusions that exist in the past. Here's the list of fusions:

Below are fusions that have their own separate capsule:

Scanning any combination of Ultraman Orb's fusions will result in Fusion Up. All of them have their own separate capsule except Lightning Attacker.

The capsules of Victory and various Kaiju Capsules (Such as Eleking, and King Joe) can be scanned to produce Victory's Ultrans. 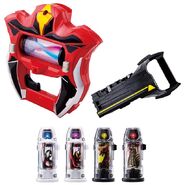 Kei with his Riser

Leito with his Riser