None
Rezaito (レザイト, Rezaito) is a monster that appeared in the series Ultraman Gaia in episode 9.

Coming from space, Rezaito landed on earth and damaged buildings and stranding people. XIG found out because of its spinning it was going to hit oil pipe lines under the city and because of his heat will blow up and cause a "China Effect' on Earth. Team Seagull was called in to stop it and save the stranded people. Soon Rezaito's tentacles retreated back, causing the building the team was in to fall but they managed to survive and with Gamu on the scene transformed into Ultraman Gaia. The two did battle for awhile but Rezaito had a hold of Gaia until he managed to get free, only to be taken by the arms and held down on Rezaito's back, using his heat causing Gaia to burn. Retaliating, Gaia sent a surge of energy through the monster to stun it and used the opportunity to fling the fiend in the air and then used the Photon Edge to destroy Rezaito. 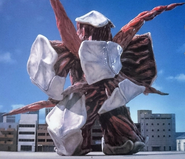 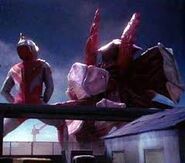