None
Reycura (レイキュラ Reikyura) is a sea sentient statue (golem) that appeared in Ultraman Cosmos.

Reycura is a gigantic sculpture created by an unnamed ancient civilization centuries ago and glorified as a sea god. If a magic conch shell was detached, the sculpture would rise and terrorize the humans out of anger. However, Doigaki's friend on a archaeological site accidentally detached the conch shell, causing the monster itself arise and attack the humans. Musashi transformed into Cosmos and held off the sculpture while giving Doigaki and his friend time to put the shell back. Afterward, the sculpture stopped and returned to its original position. Wrath of the Sea God 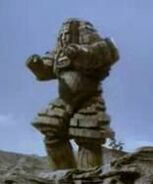