Return of Ultraman is the 4th entry in the Ultraman Series

Return of Ultraman (帰ってきたウルトラマン Kaettekita Urutoraman) is a tokusatsu SF/Kaiju/superhero TV series, and is the fourth entry in the Ultraman Series.

An earlier plot featured the original Ultraman returning to Earth to resume the fight against aliens and monsters. However, in a last minute change, a new yet similar character was introduced - "New Ultraman" (新ウルトラマン Shin Urutoraman), or just "Returning Ultraman" (帰ってきたウルトラマン Kaettekita Urutoraman), who would later become much more widely known as "Ultraman Jack" (ウルトラマンジャック Urutoraman Jakku) in 1984 and beyond. The name was decided on in a contest held by Bandai where children chose his name.

This series is a follow up to the original Ultraman and Ultraseven, which retconned to take place within the same timeline.

In a fight between two giant monsters named Takkong and Zazahn, young race car driver Hideki Go is killed while trying to rescue a little boy and a dog from the falling rubble. His valiant sacrifice is noted by everyone, even his friends and the new defense force MAT, but an unseen being also takes notice. Looking over Go is the "New Ultraman", who is so touched by Go's actions that he decides to combine his life force with that of Hideki, thus bringing him back to life. Hideki Go then joins the MAT and fights alongside them and Ultraman against monsters and alien invaders.

In 2002, Tsuburaya began rereleasing Ultraman-Ultraman Leo on Japanese boxsets. Return of Ultraman got a boxset. There is a also DVD made by the Malaysian company VGB Network. It came out in 2013, contains Malay, English, and Chinese subtitles. A few grammatical errors are made as VBG is not a American company.

Mill Creek released the series to Blu-ray on February 25, 2020, with English subtitles. As with the company's other Showa-era Ultraman Series titles, a SteelBook and a standard edition with part of a spine mural were offered. 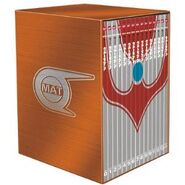 A manga series by Akira Mizuho (水穂 輝 Mizuho Akira) ran in Bessatsu Shōnen Sunday from May to December 1971.