"Why do you try to pull us apart?"

Ultraman Orb episode 19 "The Demon Inside of Me"
Renki (, Renkilit. "Love Demon") is a samurai ghost that first appeared in Ultraman Cosmos.

Sometime ago a civil war raged within Japan. Two lovers, a soldier general and a princess, from different sides fell in love with each other but they knowing that the war would keep them apart they commited suicide. But their spirits could not find peace and together they formed the ghostly samurai, Renki and terrorized Japan, but a samurai named Kagetatsu Nishikida appeared and seal the restless spirits beneath the ground sealed by a magic stone.

As time passed and now in the modern era, two developers destroyed the seal in order to create a dam, freeing Renki to terrorize Japan in the modern era. With attacks from Team EYES and Ultraman Cosmos proven ineffective, Shinobu appears, telling the samurai that falling in love would not be easy as expected and a lot of obstacles had been went through for lovers to achieve their happiness. Touched by her words, Renki disappeared with the two deceased lovers' spirits finally rest in peace.

In the Pacific records, Renki was a mentioned as vengeful spirit born from a couple composed of a commander and a princess torn apart by conflicts that was common in the Sengoku period. Driven by envy towards those blessed with romantic fortune, the spirit manifests as a blood red armor-clad samurai who terrorized brides during their wedding. The samurai spirit was finally put to rest by a monk who sealed it into a stone, and ever since then, Renki was able to use his powers to grant human wishes while being contained inside the stone.

In the present, Naomi Yumeno tried to wish on the stone after a unfortunate time at her friends bachelorette party, but Naomi took it back and threw her broken high heels at it. However, Renki didn't respond to that very well. Renki first appeared as a spirit and traveled to the Wishing Stone via shadow portal after glancing at Naomi and her friends.

Renki reappeared the next day in his gigantic form wearing Naomi's shoes and heading towards the hotel. Gai then transformed into Ultraman Orb Hurricane Slash and immediately summoned his Orb Slugger Lance to challenge to him to a duel. Orb went for using his Trident Slash on the samurai but he dodged it with his enhanced reflexes and then caught the lance himself and threw it away after he kicked and knee striked him.

Renki then brought out his katana when Orb transformed into his Orb Origin form. Even though Renki's skills with a sword proved to be superior to the Ultra's, the samurai put up an evenly matched fight in both close combat and sword fighting. Renki then used his special technique, the Mystic Energy Crimson Lotus Reversal on the Ultra, making him fall and his Color Timer flash.

With the Ultra seemingly taken care of, Renki headed towards the hotel and proceeding to slash it, only to be stopped by Naomi, who reminded him that he used his powers to help those in need and were very grateful for it and eventually, he came to his senses. When he saw Orb again, Renki planted his sword to the ground and let Orb finish him off with his Orb Water Calibur, reverting him back into a spirit and then spread out throughout the sky as a rainbow appeared in it.

The male lover, a samurai general.

the female lover, a princess

The suicide of two lovers.

Renki's first rise in the form of a demonic spirit. 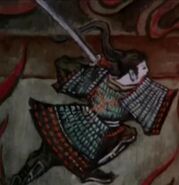 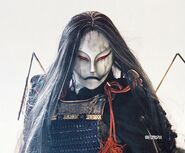 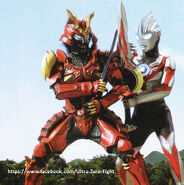