As with the GUTS members at the time of the series, "Rena" is actually referred as a mononym and that she originally held the family name Yanase prior to her father's divorce and before her marriage with Daigo. As revealed in the 2019 novel Ultraman Tiga: To the Shining Ones, she took the surname Rena Sakaki (榊 麗奈 Sakaki Rena) after her mother's virgin name.

As a child, her father promised her a gift while attending her ninth birthday. But it didn't turn out well as he had been sent on a mission to the TPC Space Center, only years later would she get to see her father again.

Of all the GUTS members she was one of Tiga's biggest supporters, save the captain. She was also first to suspect Daigo's and Tiga's connection as she seemed to have the closest bond with both persona's compared to the other GUTS members.

When Zoiger unleashed its wrath, she was the first to uncover Daigo's secret identity as Ultraman Tiga, she would also unintentionally reveal it to the GUTS crew during his seeming demise at the hands of Gatanothor. After the defeat of Gatanothor, Rena reunited with Daigo and the Sparklence turned to dust and vanished. After that Yazumi took a picture of all the GUTS members together. Take Me Higher! To the Shining Ones

Two years after the defeat of Gatanothor, Rena and Daigo were engaged, though their ceremony would be delayed due to the release of the Giants of Darkness. After Tiga's battle with Demonthor she thought Daigo had died in the R'lyeh ruins as the island sank, but he managed to escaped and the two were reunited at last.

Later on, while the two were boarding a shuttle for Mars, they were saluted by Shin Asuka, whom was a ship maintenance crewmate at that time, and would, in the future, become the next Ultraman. Ultraman Tiga: The Final Odyssey

8 years later Rena, along with her newborn daughter Hikari returned to Earth for a visit and reunited with Iruma along with Yazumi, Munakata and Horii after Tiga and Dyna defeated Queen Monera. Ultraman Tiga & Ultraman Dyna: Warriors of the Star of Light

Later her family gave Asuka a temporary refuge after his battle with Zeluganoid. She also watched with Daigo as Asuka, who had merged with Ultraman Dyna, saved the Earth from the threat of Grandsphire. Final Chapter III: Toward Tomorrow...

Some time later she had a second child, Tsubasa Madoka, who would join Neo Super GUTS while unknowingly that he also had followed in his father's footsteps (becoming Ultraman Tiga in the past). Ultraman Tiga Gaiden: Revival of the Ancient Giant

In Great Decisive Battle! The Super 8 Ultra Brothers, an alternate version of Rena, Shin Hayata's daughter, appears. Here she was in a bumpy relationship with that world's Daigo. At first she doubted his talk about seven heroes but eventually grew to believe in him and had a speech over the radio to give the people the strength to go on in the face of the monster attacks. She later watches as her father, Daigo and the other Ultras save the world. Their relationship improves and Daigo and Rena are married and have a daughter.

Sculpted by Hiroshi Sagae, this figurine of Rena is molded in cold cast. This Rena is originally a scratch built statue featured in a Hobby Magazine before it was approved for release.

A variant of the figurine features Rena wearing her helmet.

Released as an exclusive for an event, M1-Gou Rena is a PVC figure that is molded after a Bullmark toy. Rena also comes with a removable helmet.

Manufactured by MEDICOM TOY, Project BM! "Member Rena" is an articulated doll, with fabric outfits. Aside from the extra hands, Rena also comes with a GUTS HYPER gun that can be wielded or stored onto the holster, two different PDIs, and a wearable helmet.

The figure is sculpted by Hiroki Hayashi and PERFECT-STUDIO. Rena utilizes the female body frame.

Rena can be purchased by using the code included in Project BM! Ultraman Tiga. 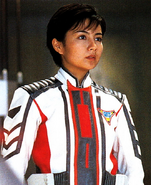 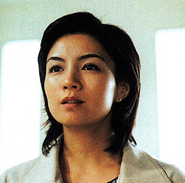 Rena and Hikari in Ultraman Tiga & Ultraman Dyna: Warriors of the Star of Light