"Don't give up, Komon. Thanks to you, I fought till the very end! As Ultraman."

―Ren encouraging Komon during his battle against Zagi

Outwardly, he was cheerful, optimistic and simple to the point of being ditsy — this, however, concealed his past experiences. Ren was not a normal human, but rather a 'son of Prometheus': a human created through genetic engineering under the flag of "Prometheus Project" (an experiment performed in Dallas, Texas in the USA). He had faster reflexes, physical strength and ESP that was more powerful than a normal human. However, Ren suffered from a genetic unbalance in his DNA which was basically cutting his lifespan to around 17–18 years. His only hope to prolong his life was a drug known only as 'Raphael'.

Running away from the institute in Dallas, Ren came to Japan hoping to live his last days as a 'normal' human and getting a job at a carnival. His hope was that he would die surrounded by people who would not miss him but around so many smiles and laughs. After fighting as Nexus for some time, Ren's condition worsened and his time approached its end, as he rapidly weakened.

After Himeya Jun disappeared and resigned his duty of being a Deunamist, the light searched for someone else to inherit its power. Ren found himself in the jungle ruins. It seemed as though he already knew where he was and why, perhaps due his ties to TLT. As a new Space Beast, Grantella, appeared, watching their loosing battle, with Ultraman, Ren accepted the being's offer and merged with him appearing and taking on the form of Junis Blue, a modified version of the Himeya's Junis form. Ren set up the Meta Field. At the end of this battle there appeared an unknown dark power. This power belonged to one hiding in the background controlling and supporting the Space Beasts. This unseen being was dubbed Unknown Hand by TLT and its power was seen in the form of Dark Field G, a type of dark field deeper into the minus range than anything Faust or Mephisto produced. This Dark Field also had the added effect of empowering the Space Beasts, both directly and indirectly. Ren met Komon after his first battle, the two becoming friends after he nursed the injury he got from protecting the Night Raiders with his body. During his second battle with Grantella, Unknown Hand deployed his power overpowering the Meta-field and tuning it into a Dark Field. Despite his disadvantage Ren won against the Space Beast using his own personal finisher the Arrow-Ray Schrom.

First Fight against a Dark Ultra

Soon another challenge came in the form of Dark Mephisto (Zwei). Sensing the dark Ultra's energy signature, Ren transformed and rushed to save Komon, Nagi and his friend from the dark being's clutches. This was Ren's first and only battle against another Ultra being did not go well. At first he could hold his own, dodging everyone of Zwei's attacks, a feat Himeya in his slower Junis mode could not hope to accomplish, despite his speed one strike was all it took to knock him down where Zwei pinned him to a cliff face and proceeded to drain him of his energy.

Only the timely arrival of the redeemed Mizorogi saved him. Mizorogi fought his replacement in Ren's place but due to his prior injury he was defeated and ultimately stabbed. Upon seeing Mizorogi stabbed and thus dying at the hands of his doppelganger, Ren was pressed by Mizorogi's words to attack Zwei, even though it could have killed the two of them. Despite his hesitation, Mizorogi's words convinced him and Ren fired the Arrow Ray Schtrom into Zwei's back. Though Ren won he witnessed Mizorogi dying in the arms of Nagi and heard his words of how he and Hiroyuki, Zwei's host were both puppets to the one TLT called Unknown Hand, who he revealed with hiding in TLT itself.

Fight against Mega Flash and Hunted by TLT

Soon after that Ren found himself on a date with a girl while Mizuo followed them, partially out of her duty and jealousy. However their date was cut short by the appearance of Mega Flash in the middle of the city. Ren left the two in custody of the M.P and ran of and transformed to protect the town. Ren quickly found that rainbow in the sky were part of his opponent's abilities. Mega Flash could create his own subspace field which negated his Meta-Field ability and lasers. The snail space beast gave him serious trouble in his weakened state and his life span was soon coming to its zenith. After a few bouts with it he was left battered and weaken as his life was drawing to its end. It was in this state that he was also captured by TLT and was experimented on like his predecessor. Fortunately he was saved by the Night Raiders, who revolted against the director's orders.

The Night Raiders scurried him away to a forest where he would be safe. When Illustrator called and told them that Mega Flash was back, Ren was adamant to go, but Nagi told him that the way he fought in the past guarantied his defeat She noticed that he never attempted to protect his own life as he did not value it due to his short lifespan. Hearing those words Ren went into battle with a new perspective and resolve and with the help of his Night Raider allies, Ren defeated Mega Flash and a revived Galberos.

Shortly after that battle, Ren heard news that Raphael, was ready and waiting for him nearby. It was at this moment Unknown Hand unleashed another Space Beast on the city. Ren was faced with a choice between saving himself or saving the world from the Space Beast Izmael - the strongest Space Beast ever. Choosing to live up to the responsibilities of a Deunamist, Ren transformed one last time. However between his weakened state and the monster's strength he was defeated with the Night Raiders downed shortly thereafter. Lying beaten, Ren was telepathically contacted by his old friend Illustrator, whose words of encouragement finally enlightened him to the Light's purpose in his life. He stood up and called forth a new technique, Over Arrow-Ray Schtrom, a combination of the Arrow-Ray Schtrom and Schtrom Sword. Using it he emerged victorious against Izmael but at a seemingly heavy cost. With Ren's final battle over the light searched for a new host.

Ren, however, survived due to the cure's intervention.

Evoltruster: Ren, being the successor to Himeya, also recieved the Evoltruster. To transform, Ren places the device to his left thigh and swings it forward. 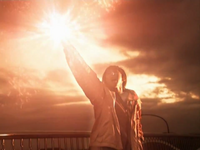 Nexus rises
Add a photo to this gallery 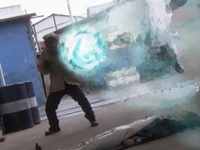 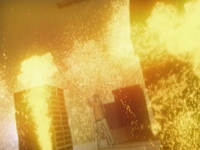 Meta Field
Add a photo to this gallery 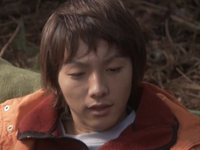 Retrieved from "https://ultra.fandom.com/wiki/Ren_Senjyu?oldid=512293"
Community content is available under CC-BY-SA unless otherwise noted.