None
Reija (レイジャ Reija), also known as Raijya, are supporting monsters that appeared in Ultraman Cosmos 2: The Blue Planet.

Sometime ago, Sandros and his Scorpiss terrorize their planet and turn it into a wasteland. As the Alien Gyashi migrated, Scorpiss chase them and destroy them. When Jin's crew about to be eliminated, Ultraman Justice destroys them and let the remaining Gyashi flew safely. They later made an island base underneath the sea within Earth and even forming a pact with a child Alien Baltan. They also receive aid from Reija, a stingray-like Kaiju for protection.

One day, while Musashi and Mari went snorkeling, they discover a portal underwater and at the same time ambushed by Reija. As Musashi about to follow Mari, he knocked down unconscious. Mari was later taken care by the Alien Gyashi while guided by the Child Baltan. When a Scorpiss attacked a city, Reija appears and fought the monster but only to be overpowered by the menace. Shau appeared and fused with Reija, turned the monster stronger but still, overpowered by Scorpiss. Scorpiss retreated for a while and Reija went back undersea

Two Reija later appeared with both of them fused with Shau and Jin. Though managed to destroy several Scorpiss, but some other appeared and overpowered them until Musashi as Cosmos appeared and destroyed the Scorpiss along with their master, Sandros. As the battle is over, they went back undersea. 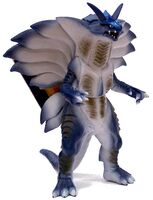 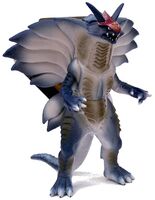 Bandai's Raijya S.
Add a photo to this gallery
Retrieved from "https://ultra.fandom.com/wiki/Reija?oldid=512284"
Community content is available under CC-BY-SA unless otherwise noted.