Reigubas was, like Monsarger, a biological weapon, but this time used by Spume. Reigubas was released just as Dyna appeared to rescue to moving base from Spume. After a short battle, Reigubas and Dyna emerged onto the surface of Antarctica and began a new confrontation. However, Dyna was weakened by the cold and was also distracted by Spume's threats of crashing the Man-Made Sun onto Earth. Reigubas quickly gained the advantage and froze Dyna, causing Asuka to fall into a unconscious state from the cold and Dyna's color timer to blink. Super GUTS arrived and Reigubas immedietly began to shoot fireballs at the fighters, but was tricked by Captain Hibiki in the GUTS Eagle Beta to launch a fireball at the frozen Dyna, melting his imprisonment. Dyna then transformed into Miracle Type and fled the site, rushing towards to Man-Made Sun and launching a beam at it, reactivating the sun and freeing it of Spume's control. Dyna became re-energized and used his Spin Slam to attack Reigubas while falling from the sky. Just as Reigubas tried to freeze Dyna again, Dyna unleashed his Revolium Wave Attack Type and sent Reigubas to an alternate dimension.

In episode 7 and 8 of Ultraman Ginga S, Reigubas' Spark Doll were used by Alien Chibu Exceller to become Five King. 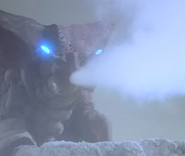 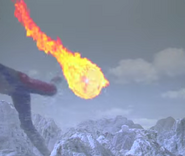 Flaming Bullet Barrage
Add a photo to this gallery

In Ultraman Ginga S, Reigubas was revealed to be a part of Alien Chibu Exceller's collection.

Reigubas reappeared in Ultraman Fighting Evolution 3 as a playable character.

Reigubas appears as a monster in the game Taiketsu! Ultra Hero as a playable character. His special attacks are ice breath and an energy blast from his large claw.

The Reigubas Sprite (MUGEN and Taiketsu! Ultra Hero)
Add a photo to this gallery
Retrieved from "https://ultra.fandom.com/wiki/Reigubas?oldid=465042"
Community content is available under CC-BY-SA unless otherwise noted.