"The dormant blood of Reiblood within my body that controls all monsters... Allow the fallen souls defeated by the Ultra Warriors to awaken again! Ujuika Reegamiyo..."

"The darkness will never fade! As long as the light exists...!!"

Unknown
Reibatos (レイバトス Reibatosu) was a necromancer-like Reionics alien and a main antagonist of Ultra Fight Orb. As one of the last Reionics, his goals are succeeding Alien Reiblood and restart Ultraman Belial's plan in controlling 100 monsters to rule the universe.

Reibatos's name comes from Reionics and Barbatos, one of the Dukes of Hell that ruled over thirty legions of demons.

As a descendant of the Reionics, Reibatos revived monsters at his disposal, first reviving Demaaga on Earth and Juda Spectre and Mecha Gomora in Planet Yomi for Orb and Zero to deal with. After both Ultras assemble in said planet, he made himself known and revived Vict Lugiel, King Joe, Birdon, Gudon, Twin Tail, and Hyper Zetton as distractions before leaving.

Orb pursued him after leaving his monsters to Zero and the Inter Galactic Defense Force members but lost track of him when he quickly regenerated. Simply leaving a clue to Orb, Reibatos arrived on the Monster Graveyard to fix the Giga Battlenizer and sent Tyrant to deal with Zoffy and Ultraman Jack. While trying to revive the deceased monsters, Orb and Zero pursued him in his dimension after dealing with his Tyrant. Knowing that he is able to regenerate instantly, Orb launches an all-out attack before finishing him with Emerium Slugger Spacium. He was presumed by the Ultras to have died but regenerates in a battered form.

"I won't forgive you for this Ultra Warriors! Ujuika Reegamiyo! I'll destroy everything... Awaken, the original owner of Giga Battlenizer, Ultraman Belial! W-Why? Could it be, Belial is still alive? T-This aura... you're..."

Not content on giving up, Reibatos tried to use the last of his energy to revive Ultraman Belial but discovers that Belial was somehow alive. It was then where Belial's son Ultraman Geed seemingly appeared (to which Reibatos sensed "something off") and killed Reibatos in an instant. Ultra Fight Orb

In a twisted turn of events, it is revealed that Ultraman Belial himself had killed Reibatos, instead of Ultraman Geed. Reibatos had simply "seen into the future" and hallucinated that Geed was in Belial's place at that moment as a result. The Symbol of Geed

Absolute Tartarus traveled through time to save Reibatos from his death, taking him into Narak. Reibatos then joined Tartarus' army as part of his Parallel Isotopes.

In the past, Reibatos resurrected Alien Bat after the latter's defeat at the hands of Ultraman Saga. Reibatos traveled to Planet Feed with Absolute Tartarus, where he was commanded by Tartarus to revive a Gymaira to interfere with Neos, Seven 21 and 80's fight against Leugocyte. Ultra Galaxy Fight: The Absolute Conspiracy

Reibatos continued to serve as part of Tartarus' army. He was tasked with reviving Gina Spectre at one point after her brothers had perished previously. Later on, he joined Gina, Tartarus and Alien Bat at the Monster Graveyard to collect the Devil Splinter that resided there, but were met with opposition. Reibatos was first confronted with Ultraman Zearth, Ultraman Nice and Ultraman Boy, who did not pose much of a threat at first, but eventually were somewhat formidable. His opposition then shifted to Ultraman X and his old rival Orb, where he was easily beaten down.

In a last ditch effort, Tartarus stole the New Generation Heroes' collected Devil Splinters, giving them to Reibatos to enhance his power, which he used to summon the spirits of Mold and Juda, and reconstruct the Giga Battlenizer once again. After using it to have the spirits be absorbed into Gina's body to form Gua Spectre, Reibatos' body could not contain the power of the Devil Splinters inside him and faded away, with Tartarus mocking him and taking the Giga Battlenizer. Ultra Galaxy Fight: The Destined Crossroad

Reibatos was released as a Deluxe-sized figures in April 2017. In promotion to the premium release of Ultra Fight Orb Blu-Ray, a clear purple figure of Reibatos is packaged along with it. This coloration is based on the one appeared in the show when emitting a mass of energy. 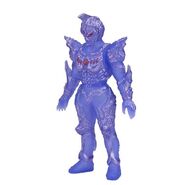