Ultraman Wiki
Register
Don't have an account?
Sign In
Advertisement
in: Heroes, Other Heroes, Reionics,
and 8 more
English

Hiroshi Maruyama
Reimon (レイモン, Reimon), better known as Rei (レイ, Rei), is a Reionics and is the main protagonist of the Ultra Galaxy TV series. At the beginning of the show he suffered from amnesia and became a honorary member of the ZAP SPACY crew of the Pendragon space-ship. At first he was hostile towards kaiju, and fought against them with his own Battlenizer Kaiju: Gomora, Litra, Eleking, and later Miclas, but after his time with the crew of the Pendragon, Rei grew as a person and became more compassionate towards all kaiju.

Rei first came to Planet Boris as a baby inside one part of the monster Bullton, who summoned the many monsters who plagued the planet. He was cared for by a little girl but he eventually disappeared. His present state was found by the crew of the Pendragon bursting out of the frozen body of a Peguila. Despite a rocky first impression and the crew's fear at his power to control monsters, Rei joined the ZAP SPACY crew. At first he was uncomfortable with his position and his team but later warmed up to them as the series progressed. He crosses paths with the mysterious Kate while having visions of a mysterious giant trapped in the side of a mountain, later revealed to be the red and silver giant hero Ultraman, who plays a part in Rei recovering his identity. As the series progresses, Rei, his monsters, and the ZAP SPACY battle various monsters from the transparent Neronga, the brutal Red King, the energy devourer Bemstar, the two Missile and Moth Terrible-Monsters Verokron and Doragory, to the giant robot King Joe Black.

At end of the series Kate contacts him during his dreams and tells him that he is a member of the Alien Reiblood and calls him out for one final battle. While this is happening it is made clear that Planet Boris' artificial sun is broken and will explode to collide with his planet and turned it into a burning crisp. Rei faces Kate and her Zetton with all three of his monsters Gomora, Litra and Eleking but they are eventually beat down until only Gomora is left and he did not fare any better alone. Rei also notices that he was feeling the pain of his monsters just like Kate, something that never happened before. It was at this time that their battle was interrupted by King Joe Black who left Gomora all but dead and proceeded to battle with Zetton. As King Joe Black and Zetton proved evenly matched and battled to a standstill, it was then that Rei taped into his unknown power and became Reimon, causing Gomora to become EX Gomora. EX Gomora proceeded to defeat both opponents, incapacitating King Joe Black and destroying Zetton.

With his newfound power Rei instinctively knew what to do and used his Reimium Reviving Ray on Ultraman, freeing him and turning him back to normal. As the crew of the Pendragon celebrated his victory Kate showed up, beaten and seemingly dying she warned Rei of the Reiyonix battle, revealed his true name of Reimon and that he was her younger brother. With that she faded away and the crew rushed to their ship to escape Planet Boris' end. However as they attempted to flee they were attacked by King Joe but saved by Ultraman, leaving the atmosphere before it became like a sun. After the crew escaped the planet of kaiju, Rei and his three monsters Gomora, Litra, and Eleking went with the crew to the ZAP SPACY headquarters on their way to Earth, a planet which Rei has never been to or even seen.

Elsewhere the ZAP SPACY crew, after their battle against Alien Reiblood, have now landed on an Earth-like Planet known as "Dent." However their visit is quickly interrupted by the appearance of the monster Zaragas, who appears before them in a meteorite. After a short battle using their weapons, Rei sends his Gomora battle against the monster and after some assistance by the ZAP SPACY, Zaragas is destroyed. Immediately afterwards, the ZAP SPACY is shocked by the sudden appearance of Ultraman Mebius, who takes Rei and teleports away before the ZAP SPACY can respond. Rei is then confronted by Mirai, the human form of Ultraman Mebius. Mirai tells Rei the story of the Land of Light, Ultraman Belial's betrayal as well as the Giga Battlenizer.

Mirai then asks for Rei's assistance now that Belial has returned, and Rei agrees to help. Rei and Mirai soon land on the frozen surface of the Land of Light, and begin to journey to the Plasma Spark Tower to reunite with Ultraman and Ultraseven. However, the duo are suddenly ambushed by the sudden appearances Dorako, Bemstar, and Saramandora, all led by an Alien Shaplay, who was sent by Ultraman Belial to stop them from reaching the Tower. During the fight, Mirai's Medium Brace is damaged by Alien Shaplay and Rei nearly loses his Battlenizer, but luckily Shin Hayata (Ultraman's human form) and Dan Moroboshi (Ultraseven's human form) as the Ultra Brothers arrive to briefly stop Alien Shaplay; Rei rescues his Battlenizer and Dan's Capsule Monsters: Windom, Miclas and Agira fight and destroy Belial's monsters as the four heroes continue to venture to the Spark Tower and the three Ultras receive the remaining light that Ultraman Taro saved as they transform and headed to the Monster Graveyard.

Once arrived, Belial MonsLoaded his Battlenizer monsters, as they appeared and beginning the fight. Rei joined the battle as well, summoning Gomora and Litra to his aid. Belial later influenced Rei, turning the young Reionics against his allies and commanded Reionic Burst Gomora to attack Ultraseven. It wasn't until his ZAP SPACY (with Dyna's aid) friends arrived and free him from Belial's control. Ultraseven's son, Ultraman Zero arrived and finished off several monsters after finished his training and his redemption approved. Belial at wits end, killed his remaining monsters and fused with several deceased monsters into Belyudra. All forces tried their best to attack the monster proven themselves vulnerable. Rei stumbled upon Belial's Giga Battlenizer and used it to control the monsters that make up Belyudra's body to rebel, allowing the everyone to finish it and Ultraman Zero finished Belial. After the battle is over, the party headed to the Land of Light and the ZAP SPACY headed home via Dyna's Twinkle Way.

While Rei and Hyuga are patrolling on space, they receive an SOS call from an alternate dimension as they entered to detect it. Once they arrived on an unknown planet where Ultraman Zero fought the Robotic Ultra Brothers, a heavily wounded alternate Hyuga reveals that two weeks ago, Alien Salome engineers a factory to create the Imitation Ultra Brothers to conquer all dimensions but however, the effect of their factory also emitting dimensional gaps to various universe. The alternate Hyuga entrust this mission to Rei and Hyuga before he vanishes. Rei of the ZAP SPACY encounters Mecha Gomora, he sent out his Gomora to do battle. However, Mecha Gomora proved to be a challenge for Gomora, and so the mechanical double easily beats down Gomora. Shortly afterwards, Ultraman Zero arrives, saving the ZAP SPACY and battles Mecha Gomora himself. The tides turn to Zero's favor as his own strength is enough to hold back Mecha Gomora on his own, destroying one of his head crest horns and both of his claws with his Zero Sluggers. Soon, Zero is confronted by the Imitation Ultra Brothers and Mecha Gomora is called back for repairs, but not after taking out both Rei and Litra in the crossfire.

Later, Rei found himself tied up and having lost the Battlenizer. Suddenly, a warrior appeared and released Rei by destroying the machines with his attacks. The warrior was revealed to be an alternate Rei who wanted his counterpart's help. Shockingly, the counterpart also lost his Battlenizer as the other Rei manages to regain his senses. As they witness the Imitation Ultra Brothers being teleported via Darklops Zero, Hyuga appeared and gave them the Neo Battlenizer which the first Rei used to summon Gomora to destroy the robots. Herodia sent forth Mecha Gomora and ordered him to fight. While Gomora was controlled by both of the Reis, it was overpowered by both Mecha Gomora and Darklops Zero, until Ultraman Zero finally appeared and assisted Gomora. After the battle was over, the alternate Rei stated he received his counterpart's memory while holding the Battlenizer itself and vanished, bidding farewell to him. However, Darklops Zero still survived and self-destruct forcing everyone to flee from the Planet Chain's destruction. As they awakened, they at first thought that it was a dream but proven wrong when an alternate Hyuga called them and thanked them for their assistance.

Rei and Hyuga had planned to visit Planet Bram to join their friends on a vacation. However, they put these aside after stumbling on a moving giant metallic planet. Witnessing a giant crack, they entered and witnessed inside the sphere. After landing, they witnessed a Legionoid Beta approach and attack a defenseless Princess Emerana. Rei saves Emerana by calling out Gomora. Gomora easily pummels the Legionoid and eventually destroys it with his Super Oscillatory Wave. Soon, with Inpelaizer, Ace Killer and King Joe appearing, the Ultimate Force Zero arrived and finished them. Jean-Killer appeared and attacked the party alongside a brainwashed Jean-Bot. As Jean-Bot hurled his axe to Emerana, Rei and Hyuga...

Part 2: Pledge of the Meteor

The princess shouted her robot to stop. As a result Jean-bot ceased his attack on Emerana, Rei and Hyuga, and regained control but forced himself into shut down. Jean-bot revealed what actually happened to the three. He also revealed that the sphere they entered would be set onto a collision course into Planet Bram. After Emerana successfully pursued Jean-Killer to join their side, they went to Beatstar Tower and fought the robot armies, all while Ultraman Zero and Hyuga piloted-Jean-Killer destroyed Beatstar, finally destroying the giant sphere and saving Planet Bram. Once the event is over, Rei and Hyuga continued their trip to Planet Bram. 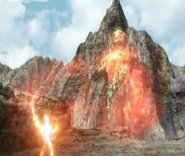 When Reimon feels extreme anger or rage, he transforms into Burst Mode (バーストモード Bāsuto Mōdo), a black/red form, and he has the ability to evolve Gomora into Reionic Burst (レイオニックバースト Reionikku Bāsuto) mode as well. In this form, Reimon becomes extremely powerful but violent in battle, as does Gomora, and will fight both friend and foe alike. He also evolved into this form after being mind controlled by Belial. Later in the series, however, he learns to evolve Gomora into Reionic Burst mode without entering Burst Mode himself. 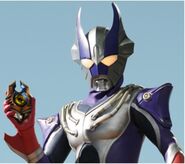 Rei controls a great number of monsters thanks to his Battlenizer, they are:

A redeco of the Reimon figure, in Reionic Burst colors. 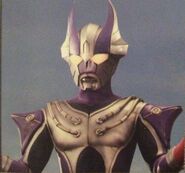 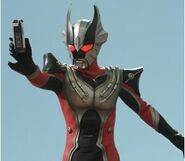 Rei with the alternate version of Hiroshi Hyuga

Rei with the alternate versions of Hyuga and Masahiko Kumano