One night, an ancient creature sealed beneath ancient ruins in Central America awakened. Its name was Reguila, based on an ancient Mayan god, and burst through the ground. DASH was aware of Reguila's presence and used Mother DASH to chase after him. DASH Birds were sent after Reguila, but Kaito's arrogance from an earlier argument got the better of him as he risked his life twice to turn into Ultraman Max to no avail. Reguila's eye darts shot his fighter down and the assault on Reguila had to stop. Reguila appeared the next day in the city of Saipan and would soon arrive in Japan. After a missile barrage from DASH, Reguila fell in an area full of windmills and quickly got up. Its hurricane force winds annihilated everything in front of him. Koba and Sean were shot down by Reguila's chest beam and once they crashed the bird-like Kaiju walked towards them while they were knocked out. Before Reguila could use its pincer claws, Kaito showed up and shot the creature with two homing rockets from a DASH van. Reguila began to follow Kaito and once its eye darts weren't enough it used hurricane winds that sent the van flying. Kaito managed to turn into Max and clashed with Reguila. Try as it did, Reguila was of little match for Max's power and once Max escaped its chest ropes he used the Maxium Sword to cut Reguila in two. As Reguila tried to fly off, it became electrified and soon exploded. 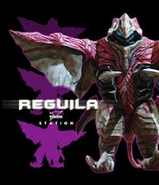