―Redman's catchprase, which he says before beginning most of his battles

Kin'ichi Kusumi
Redman (レッドマン Reddoman) is a peace-loving warrior[1] from Planet Red in the Red Nebula. He is the main protagonist of the Redman TV series and Redman comic book. While he fights for peace, Redman is known for his extremely straightforward-yet-brutal fighting style, and prefers finishing opponents rather than sparing them, often using extremely powerful physical techniques in conjunction with his set of weapons to bring down his targets in record time.

In comparison to Ultraman, Redman's fights are typically far more aggressive and powerful, and Redman relies mostly on brute force and vicious slashes with his weapons, as opposed to the elegantly choreographed punches and kicks that are associated with the Ultra Warriors.

Redman specializes in hand-to-hand combat. He usually weakens his opponent with punches and kicks and finishes them off with his weapons. Due to the series' low budget, Redman rarely used beam attacks, opting instead to use his strength and sheer force to overpower his opponents. He also has some techniques which are used less frequently, such as stabbing a monster with a Red Arrow or Red Knife while riding on it[2], decapitating a monster with a Red Knife and bashing a monster's head repeatedly on the ground before breaking its cervical spine by turning its head backwards[3].

Redman earned the nickname Red Killer (赤い通り魔 Akai Tōrima) from fans of the series for his tendency to use extreme aggression and brutality against his opponents. The following are a number of cases:

Redman's history and backstory were not stated in his series itself, but magazines stated that Redman was an alien that came to Earth after invaders destroyed his home planet and merged with Officer Sakomizu of the SIA.

Redman returns as the star of the comic penned by Matt Frank.

As a seeming sequel to the original series, Redman has continued his endless crusade to cull the seemingly infinite amount of monsters and aliens sent after him, having actually never set foot on Earth and instead has been on an unknown planet for the last 47 years. Throughout the comic, it seems the hero has finally started to question the purpose of his hunt. He finishes off some enemies in less brutal fashion or other cases like letting Alien Icarus escape and even sparring the normal Kanegon as it awaits death out of respect for its will to live. This is to the dismay of his mysterious watchers, the Cicada Humans who have been filming and broadcasting him for years. In response to his defiance of the routine, they send new enemies his way such as volcanic avian Birdon and hybrid beast Gesubira to force him back into it. As of volume 2, time will only tell if Redman can finally achieve a happy ending after all of these years. 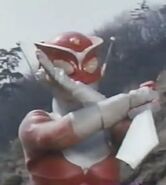 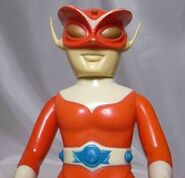 Released as part of the 3rd Volume of the Giants of Light Collection subline of the Mask Collection lineup, This Redman's helmet display features light-up eyes. He was released as a secret item for this lineup.

Redman with his knife

Redman with his spear 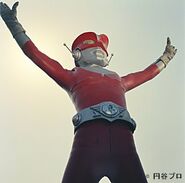 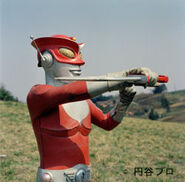 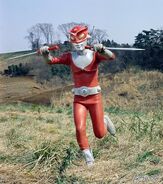 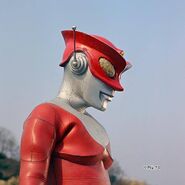 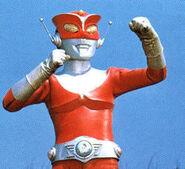 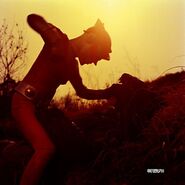 Peguila's body with a knife in it

Redman fighting Gomora in the opening to Redman 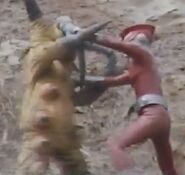 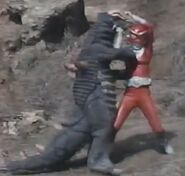 Redman with Matt Frank, the illustrator for his comic adaptation.

Redman serving as a pallbearer with Triple Fighter, Mirrorman, Fireman and Jumborg Ace at a 'funeral' for retired monster suits.