None
Red Smogy (レッドスモーギ Reddo Sumōgi) was a sentient red cloud from space that suddenly appeared above the Japan Alps. He appeared in episode 4 of The☆Ultraman.

Red Smogy appeared one day in the skies of Japan with the Science Guard Party trying to disperse the cloud. However, the weather phenomenon proved more difficult to disperse even with missiles failing to do anything. After Kei acquired a sample of Red Smogy, a second attempt to break up the cloud was initiated only to fail once again with the smog turning into a gigantic cyclone. The smog sample was sent to a laboratory on the base with Hiroki helping the scientists, soon discovering that the gas was actually alive. Shortly after Hiroki told the other members of the Science Guard Party, Red Smogy was floating toward a rain storm around one of the local mountain sides. The scientists quickly discovered that water changed the gas sample drastically and shortly after the smog cloud would reveal Red Smogy's true form. As Science Guard Party attacked the rampaging monster it was to little avail as he kept violently attacking the countryside. After a failed attempt to defeat him underwater, Red Smogy attacked a nearby dam which forced Chouichirou to turn into Ultraman Joneus. Shortly into the fight Joneus mercilessly beaten Red Smogy until he managed to pin him to a nearby mountain. After flying into the stratosphere, Joneus used his Planium Beam to disperse the clouds so that Red Smogy could turn into a smog cloud. Upon this occurring Joneus transported Red Smogy into space.

A figure of Red Smogy. 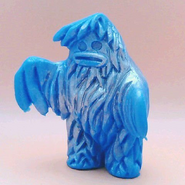