Return of Ultraman episode 46 "This One Blow Filled with Anger"

Redman
Red Killer (レッドキラー Reddo Kirā) is a Kaiju from the TV series, Return of Ultraman. It first appeared in episode 46.

A powerful alien creature brought to the Earth by Alien Zoole, Red Killer was unleashed on the Earth to threaten humanity, throwing its boomerangs and destroying buildings, the creature shrugged off MAT's attacks until Go summoned Ultraman Jack! The hero tackled the strange alien beast, but was quickly forced back by a volley of boomerang throws. As his power ran out, Jack caught the boomerangs in mid-air and charged forward, slicing them through Red Killer’s throat and body. When the two turned to face one another, Red Killer's head rolled straight off its shoulders and his body split apart. This One Blow Filled with Anger 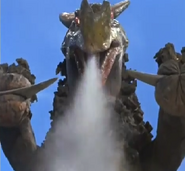 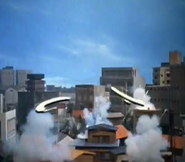 Red Killer's first appearance on the show was in episode 94 where he battled Redman alone and for the first time in this series' history, this monster was able to give the alien hero a hard time in battle due to his seemingly limitless tenacity and extreme knowhow in combat. At first, when Redman tried to get an advantage over the monster, Red Killer would overcome, block the attack, and knock him back down. However, like all of the other tight spots the alien hero has been through, he never gave up and finally gained the upper hand against the monster. After they teleported to the top of a short hill, Red Killer finally met his end in this fight after Redman ripped off his horns and threw it him, which resulted in him tumbling down and exploding afterwards. Redman would eventually face Gudon in a fight which was not seen in this episode.

Red Killer reappeared at the end of episode 98, along with Gomora and they prepared to take on Redman after the latter defeated Gudon and Draculas and in the following episode, they used their telekinesis powers to prevent his Red Arrow from killing them and dropped it on the ground but Redman teleported behind the monsters and dragged them by the tails. Both monsters had the upper hand against the alien hero due to their combat prowess and advantage in numbers but Redman never gave up and pulled through by slashing both monsters with his Red Knives, killing them in the process and ending the seemingly-endless wave of monsters.

In the 100th episode of the show, Red Killer showed up on top of a hill and provided backup to Jirahs, who was fighting Jirahs at the time. Despite the two monsters putting up a good fight against the alien hero, the latter didn't give up and, after a long, evenly matched fight, Redman managed to defeat Jirahs and then Red Killer soon afterwards with his Red Chop (the attack was for the latter monster).

Red Killer reappeared in episode 102, where he assisted Gokinezula in fighting Redman when the former started to lose against the latter but he too, didn't stand a chance against the hero as he gained the upper hand by grappling the monsters and then throwing them one at a time. After he killed Gokinezula, Redman tried to kill Red Killer with his Red Arrow, but the monster caught the weapon in his hands and threw it at the alien hero, hoping to kill him. Unfortunately for Red Killer, Redman dodged the attack and defeated the monster with a hard double kick to the face.

In episode 104, Red Killer started his fight with Redman alone and managed to hold his own against him. When Peguila showed up to help him, Redman had difficulty at first, but once again, he stood his ground against both monsters with his usual moveset of grapples, throws, punches, kicks, and chops. Even when the monsters had them right where they wanted him, the alien hero managed to overcome the difficulties. After he defeated Peguila, the alien hero turned his attention towards Red Killer and defeated him with a hard Red Kick to the face.

Red Killer reappeared in episode 107, where he not only teamed up with Peguila and Jirahs once more, but also with Gudon as well. When Redman encountered all four monsters after he came down from a hill, all four monsters crossed their arms, disappeared through smoke, reappeared in many angles of the alien hero, and then circled around him before fighting him. While the alien hero did his best to hold his own against the monsters, they proved to be more of a challenge for him due to their teamwork. Eventually, Redman pulled through and defeated all four monsters with an explosion from throwing his Red Arrow to the ground. 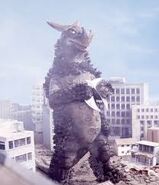 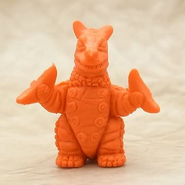