Unknown, now residing in the Alien City on Earth

Red was a champion of the underground fight club with in the Alien City. However he was dethroned and lost his right eye to Jack in the match that dethroned him.

While Jack and Shinjiro were having lunch in a park area in the alien city, Red appeared and challenged Jack to a rematch. Jack, having won by some trickery presented Shinjiro as his superior (he called him aniki in a yakuza fashion) setting the poor boy up to face the large alien. Red sent Shinjiro flying but commented on how the boy casually survived his punch.

As Shinjiro was ready for another round, they were stopped by the appearance of Moroboshi, who demanded they stop. Not wanting to tackle with the SSSP, Red allowed them to leave without incident.

Red was with Jack when he encountered an alien agent and called the SSSP. Sometime later he and Jack appeared in the middle of a city, causing a commotion, when Shinjiro appeared to investigate, Jack gave him the okay to use an unknown drug and transform into a giant, gaining a greater resemblance to his namesake.

Red fought Shinjiro, who for a time held his own against the giant but the boy was eventually overpowered, with his aggression increased Red through Shinjiro at a mother and child causing him to suddenly gain the power of flight. With that, Red was no longer able to fight Shinjiro and the battle was ended. The whole thing was a setup to get Shinjiro to awaken more of his latent powers.

Jack and Red, disguised as a toddler, went to see Shinjiro at a cafe after his identity had been found out by Seiji Hokuto. Jack comforted him but told him to also beware, while Red was too busy showing off his form-changing device.

He later appeared with Jack and Shin Hayata to help Shinjiro and Seiji fight off against the Ace Killer Squad. After that, Jack disappeared to America and left Red behind, angering him. Agent Adad approached Red and warned him about the Star of Darkness getting more active, and recruited him to find Yapool, who was also in America. He and Adad recruited Kotaro after nursing him back to health.

Red joined Jack and the others in the battle against the Star of Darkness, taking on the footsoldiers, but soon found themselves overwhelmed by the Golden Fortress. Fortunately, Moroboshi arrived with new weapons and single-handedly destoyed the giant robot, leaving them and the other Ultramen to fight against the Star of Darkness' members. Jack and Red teamed up on a brutish alien, but the foe proved too tough for them. Moroboshi arrived and simply sliced the alien in half, upsetting the both of them. 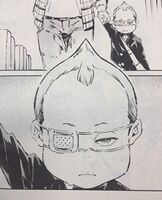 Red's tail, present in his true form
Add a photo to this gallery

Retrieved from "https://ultra.fandom.com/wiki/Red_(ULTRAMAN)?oldid=512254"
Community content is available under CC-BY-SA unless otherwise noted.