Ragstone was designed after an American football player, with its fight against Cosmos was emphasized to resemble such sports.

A bizarre rock-like monster from space, Ragstone was sent to Earth humans' emotion. Over time Ragstone started to make a cult of sorts, members consisted of figures from many regions. It disguised as building made in his image, while the cult in gathering, Ragstone would fire burst of orange beam on them; victims' abilities would starkly enhanced once exposed to side beam, but started to lost emotion and develop addiction with it. Once EYES discovered this strange cult, Shinobu went to investigate only for Ragstone turned her as well. After EYES quarantined Ragstone's building from his followers, Shinobu was placed under the alien's control and started to head toward him. Shortly after, Ragstone grew to his true form. When Ragstone amplified his powers to make many more worshipers, Musashi turned into Ultraman Cosmos. Once Cosmos went from Luna to Corona Mode, he stopped Ragstone from using his powers. The battle between Cosmos and Ragstone seemed to be even until the alien creature shrugged off the Naybuster Beam without even a scratch. Realized Ragstone's power came from human's emotion "rage", Cosmos went back into Luna Mode to use the Full Moon Rect as a counterforce of "love", restoring everyone's emotion and forcing Ragstone to flee Earth with a mysterious saucer. The Magic Stone

After failing to capture the baby Arados, the Alien Nowar launched Ragstone Mechalator to battle Team EYES. Ultraman Cosmos appeared and battled the cyborg monster but was quickly overpowered by the monster and flying saucer teamwork. Arados used the last of its power to banish Ragstone Mechalator into another space and time, before seeming to finally die from exhaustion. Cosmos furiously destroyed the Alien Nowar spaceship. Future Monster 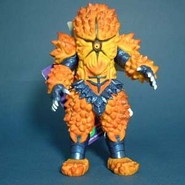