Ultra Q: TBA
Ultraman:
Ragon (ラゴン, Ragon) are a race of aquatic humanoid monsters that were generally reclusive but easily provoked. A pair appeared on the island of Iwanejima and a mutated one appeared terrorizing the seaside some time later.

The Ragon species once ruled the Earth after evolving from reptiles 200 million years ago. They eventually settled their lives somewhere in the deep ocean of 20,000 meters below the sea level.

Jun and Yuriko travel to the island of Iwanejima to investigate undersea volcanic activity. A young marine geologist, Dr. Ishii, has theorized that the entire island may soon be in danger of submerging beneath the sea. Ishii's theories, however, are met with indifference by the island's population, which relies on the local fishing trade to exist. When a mysterious object is retrieved by one of the fishing boats, a strange humanoid sea creature comes ashore and terrorizes the village at night. Dr. Ishii wonders if the ancient superstitions regarding a primitive race of beings called Ragon, which are believed to live beneath the sea, could be true. The creature enters Ishii's house, frightening the doctor's younger sister, Fumiko, before leaving. Jun notes that Ragon was momentarily drawn to the music from a transistor radio, which appeared to calm its hostile nature. Jun uses the radio to lure the creature to the edge of a cliff, where a sudden tremor causes it to lose its footing and fall to the rocks below. The escalating tremors indicate that Ishii's theories are true; but when the villagers try to leave the island, their path is blocked by a second Ragon, which surfaces in the harbor. The strange object turns out to be an egg, which hatches a baby Ragon. Furniko delivers the infant creature to its parent, who gently takes the baby and returns peacefully to the sea. Arriving in a helicopter, Ippei rescues Jun and Yuriko and the villagers flee the island in their fishing boats. Iwanejima is torn apart by a massive quake and vanishes beneath the waves, a frightening omen of what may one day happen to Japan. The Undersea Humanoid Ragon

A male Ragon was originally a human-sized beast until an atomic bomb accidentally went off in the ocean and caused it to grow huge. It then found another atomic bomb and destroyed a ship before it took it to shore where it attacked a seaside hotel. The monster then pursued Fuji, Hoshino and a young girl into the nearby forest, where the Science Special Search Party tried to stop it from a jet, but failed. Hayata turned into Ultraman and battled Ragon, which was hard because he had to keep the atomic bomb from going off. Eventually Ultraman killed the creature with his Spacium Beam and it fell off of a cliff. Ultraman then flew into space where the atomic bomb detonated. Five Seconds Before the Explosion

Ragon was one of the monsters turned into a Spark Doll during the end of the Dark Spark War. He was brought to life by Alien Valky, who used the monster as a tool to disturb the friends of Chigusa. The poor girl whose dream to become an idol was shattered, became sucked into pure jealously because of the success of Hikaru's friend Misuzu, whom is an idol featured in a magazine. Valky, pleased by her suffering and emotional pain, sent Ragon to disturb the place, making one of the members of the photoshoot team run away in fear at night. Little he knew the monster was attracted to the pop-song on the radio. A day later, at morning, the Kaiju in human-size attacked a photoshoot of Hikaru, while the photographer screamed, Hikaru attacked the monster, letting Misuzu run away from the monster, who seemingly is attracted to her appearance. Hikaru fell, and just when Ragon was about to capture her, the pop song started to play, and the monster ignored her, searching for where the song came from. The monster fell to the ground, and turned into a giant.

Hikaru's instinct told her the Kaiju was actually result of the minus energy of Chigusa's jealousy, that turned her into the kaiju. She turned into a giant form, and Hikaru had no choice but to use Ultraman Ginga's power to use Ultlive on King Pandon to fight Ragon. Hikaru (as King Pandon) tried to calm down Chigusa's anger, to no effect. Misuzu turned on at full volume the popular pop-song Chigusa loves, and it called Ragon's attention, who stopped attacking Hikaru. Hikaru turned at the moment into Ultraman Ginga, and tried by force to stop Ragon. Ragon's physical strength was so weak it barely hurt Ginga, if at all. He tried to reason the angered kaiju-transformed girl, but she didn't listen. Misuzu, alongside Ginga, told Chigusa to remember her dream, but with that darkness in her heart she was unable to reach it. Chigusa agreed, and Ginga used his Ginga Comfort to calm down and clean Chigusa's of her jealousy and wrath. She turned to normal, and Ragon returned to his Spark Doll form. The Idol Is Ragon

In episode 7, Ragon along with many different monsters are seen cheering for Ultraman Ginga as he fights Dark Galberos. The Closed World

It is likely that Ragon returned to space in her original form after Ultraman Ginga defeated Dark Lugiel. Your Future 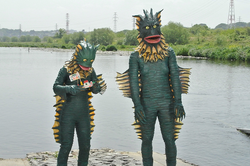 Both Ragons lived in the ware house of the fishmonger Mr. Minamoto, who provided the Ragons with food and even gave the Ragon child a toy boat as gift. As mysterious earthquakes arose in the city, the adult Ragon went out of the ware house in disguise to get to the fish market, however she was noticed by two women who contacted the VTL. However once at the market, the Ragon's cover was blown when it was face to face with a woman, who screamed at the sight of the monster. Minamoto hurried the Ragon into the store as several more people came to investigate. Minamoto scolded the Ragon for coming out of hiding however the Ragon was trying to tell him that her child was not feeling well and needed a fish. So Minamoto lead her out of the store under the cover of her disguise and an umbrella all while Ittstsu, the SSP and the startled women. Shin and Jetta managed to capture some footage of the merman-like monster and decided to secretly go after them.

The SSP managed to follow the pair and sneak inside the warehouse in search of the monster using Shin's UMA detector. They eventually came up close and personal with one of the Ragons from behind them and all four of them freaked out and ran away. Shin came across the sick child Ragon and the fishmonger and offered to take a look at him, but the child started to cry until Naomi sang a lullaby to calm down the child. While the child was feeling better, another earthquake occurred and Gai rushed in to evacuate them. When they went outside they came outside the monster Gubila appeared in search of food. As everyone fled, the child Ragon then realized that he forgot his toy boat and went back inside the warehouse to retrieve it, only to find himself on Gubila's drill nose when the latter drilled his way in. He then proceeded to eat him, much to the horror of his parent and caretaker, but then Gai transformed into Ultraman Orb in his Hurricane Slash form and forced Gubila to spit him back out via water spout and was returned him in one piece.

Afterward, Mr. Minamoto, Ittetsu, Gai, and the SSP escorted the two Ragons to the nearest body of water and when the first former wished them farewell, the child broke down and gave him a big hug. As Naomi sang one last lullaby for the child, both Ragons went into the water and then disappeared. The Urban Merman

The Ragons are later seen on the news where the two are fleeing from Japanese shores by riding on Gubila's back in light of Maga-Orochi's imminent return. The Giga Lord Monster Strikes Back

At least one young Ragon is a native to Planet Liquitor, who was threatened by a Peguila. After being rescued by Ultraman Ribut, it growls in gratitude of the Ultra's help. Ultra Galaxy Fight: New Generation Heroes

Ragon became a Spark Doll in the conclusion of the Dark Spark War due to the Dark Spark's powers. Her Spark Doll was kept in Dark Lugiel's collection, and given to Alien Valky to give to evil-hearted humans and seed chaos.

After Dark Lugiel's defeat, Ragon's Spark Doll is likely to have reverted back into its original form and departed Earth to return home.

In the manga, Jack encountered a race of aliens who highly resembled the Ragon. However they had more human-like faces and even hair on their heads.

Ragon appears throughout the majority of the series, Ultra Zone. He (as well as his wife and son later on) participate in several antics and skits throughout the show that sometimes entertain with those of his fellow monsters, Kemur and M1.

In episode 15 she talked about the monster she researched: Snowgon, her master, Alien Black, and how they lost to Ultraman Jack. In Episode 37, she, along with Kemur and Black King, took on Chaos Ultraman and Chaosroids T and U. Ragon quickly took down Chaosroid U with her Radioactive Ray. The fight was actually Ragon's own delusion. 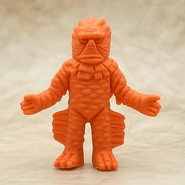 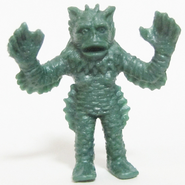