Land of Light in Nebula M78

Ultraman Taro episode 24 "This Is the Land of Ultra!"

Rabbidog was Ultraman Taro's pet who resided in the Land of Light. When Taro returned to M78 to recruit the help of the Ultra Brothers from Mururoa's crisis on Earth, Rabbidog greeted his master as he entered the Land of Light. The tiny creature followed Taro to the Ultra Tower - were he left the Ultra to his quest. 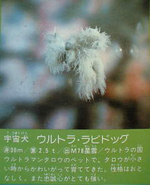