In use
R/B Crystal Collection Case (ルーブクリスタルコレクションケース Rūbu Kurisutaru Korekushon Kēsu) is a container used to store the R/B Crystals. It has 11 slots opposed to the R/B Crystal Holder, which only has 4.

At some point in time, Makoto Aizen obtained this device and the AZ Gyro through unknown means. Since then, he had used it to store the R/B Crystals he had, which were used to summon monsters. This device also contained the Orb Origin Crystal as its centerpiece, while surrounded by four Kaiju Crystals that embodies natural elements. These four crystals retain as Makoto abducted eight Gai Kurenai-like people and use their brainwave to repair the Orb Origin Crystal.

Note: These are based on observations. If there are any mistakes, they will be rectified as soon as possible. 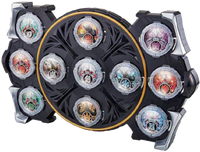 The set so far, along with the damaged Orb Origin Crystal

Retrieved from "https://ultra.fandom.com/wiki/R／B_Crystal_Collection_Case?oldid=536771"
Community content is available under CC-BY-SA unless otherwise noted.