Queen Tortoise was a species of Ouron Island turtles that 30 million years ago grew super huge after volcanic eruptions and earthquake but most were peaceful kaiju. Her mate was King Tortoise that lived in the Ouron Island waters.

As her brood of eggs prepared to hatch, the female Kaiju made her way ashore depths so she could lay her future children. However, a group of cruel, heartless poachers were on the island and as the peaceful monster finished her egg laying, attacked the still weak monster, firing a rocket into her neck. Queen Tortoise quickly covered her eggs and tried to return to the sea and safety, only for an electrified net to cover her. She called for her mate to come to her rescue but he soon suffered the same fate as her, barely escaping capture but sinking to the sea floor unconscious. The massive reptile could only watch in sorrow as her brood were kidnapped before her eyes. Then, later, she was forced to watch in horror as her eggs were eaten before her eyes. With her eyes red with rage, Queen Tortoise trashed, eager to avenge her slaughtered offspring, but ZAT, misunderstanding the situation and believing the Queen reptile to be the aggressor, fired on her. But fortunately, her mate arrived to free her from the net and let them leave into the sea. However, the duo of Kaiju were not finished, they would have terrible vengeance for the sins mankind had afflicted upon them.

Later that night, the twin turtle Kaiju tracked down two of the poachers, crushing their car and killed one by eating him with one running away from. Later as one of the poachers ran from terror at one of the surviving eggs beginning to hatch, Queen Tortoise erupted from the ground, killing the man but also forcing Kotaro to transform into Ultraman Taro. The hero soon flipped the monster over his shoulder, but she laid explosive orbs on his back as he did so, then after she’d been thrown to the ground, detonated them. Taro’s body was racked with explosions, forcing him to the ground. But he soon rose up and struck her with the Strium Beam, but while she was wounded, she wasn’t killed and called out to her mate. After he too was shot down, the two Kaiju used their energy tornado attack to trap the Ultra. Taro was completely helpless before the attack, finally being thrown severely weakened to the ground and forced into retreat. ZAT tried their best but the twin Kaiju were far too much for them, then they saw two of the poachers fleeing, using their tornados to suck the humans up to their doom. With those who wronged them dead, the two retrieved their eggs and began nesting again. ZAT, wanting to aid them, put their eggs in a huge basket to help them return their remaining offspring to their island home, soon leading them off in peace. Their eggs were soon returned home, much to the twin kaiju’s delight. While this should’ve been the end of the terrible event, the military chose to attack and kill the two kaiju, however, bombarding them with weapons. Queen Tortoise watched in horror as her eggs were destroyed, taking the last surviving one in her beak to protect it as the island sank with them. But nether Kaiju were dead and were now infuriated once again.

Queen Tortoise landed in Tokyo, tearing the city apart in her fury, and this time it was mankind as a whole that was the target of her fury. ZAT tried to stop her but she merely used her bombs to attack the city. Kotaro, seeing weapons were useless, transformed into Taro and attacked the monster, only to be blasted Taro with her beam bombs. But he managed to recover and strike her with his Strorium Ray. As she lay wounded, the egg she’d guarded fell from her mouth and hatched before her eyes. However, ZAT was ordered to kill the infant, but Taro stood to defend the newborn. But Queen Tortoise soon died from her wounds, but did live to see her final baby hatch. Taro took her body into space, luring King and Mini Tortoise behind him to a safe place amongst the stars along with Ultraseven who happily let Mini Tortoise ride on his back with King Tortoise following. 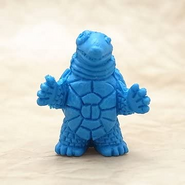