Psyqueen (サイクイーン Saikuīn) was the combination of Queen Bezelb and Psychi and the final antagonist of Ultraman Orb THE ORIGIN SAGA.

After Psychi's spiritual resonator device shorted due to overheating, he proposed to his assistant Partel to combine both him and the Queen into a single figure, resulting in Psyqueen's birth.

With Psychi no longer needing of the Tree of Life's fruit, Psyqueen led the remainders of the Bezelb and Kugutsu infected Arstron and Vakishim to rally the attack. They faced against Orb, Dyna, Cosmos, Gaia, and Agul before Shohei and Yui unveiled the matured Tree of Life's fruits, to which Cosmos and Orb used it to purify all Kugutsu victims. Angered that their plan failed, Psyqueen charged itself in an attempt to fuse with the War Deity until all Ultras open fire towards the fusion. Partel managed to separate the fusion at the last minute, allowing Orb to save Psychi and left the Queen Bezelb to her death. Heat Haze Great Land ~A New World~ 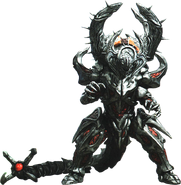