Natural part of some Ultras' anatomy
Protectors (プロテクター Purotekutā) are chest armor found on some Ultras, they are known as the most durable part of an Ultra's anatomy and are often cited as being nearly indestructible. Unlike Ultra Armor, this armor is not the Ultra's skin, yet is noted to be part of their natural anatomy. For a few, the armor serves the role of solar panels, enhancing their natural solar energy absorption abilities and allowing them to augment their time limits. Only a select number have them, implying they only appear in a few bloodlines.

The protectors are pieces of natural armor generally located on the chest area of an Ultra, generally the front. They range from the type that covers most of the upper chest and back, those that covers the upper body and shoulders, those strips of material that cover the front and upper back and the occasional small pieces in front. Regardless of their size and/or shape they are noted as being the sturdiest part of an Ultras' anatomy.

Hudra, a Giant of Darkness possessed a unique protector which not only covered his chest but also down to the left side of his waist.

Some Ultras, such as Ultraseven and his son Zero, use their Protectors as solar panels. These protectors are noted for having a secondary texture in blocks all over their protectors. This absorption appears to be always present, as several times Seven has fought and showed no sign of the 'three minute rule' until it became dark. It is now known that these 'textures' are called Spacium Energy Generators, are the reason why only Seven and presumably Zero's protectors allow them to actively recharge.

Darklops Zero, thanks to the modification by Alien Salome, he is able to open his protector to fire the Dimension Storm which can sent its target to another dimension. Ultraman Geed as Solid Burning was able to fire his Solar Boost by charging energy with his protectors. 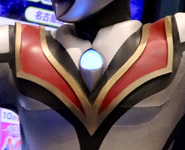 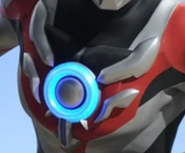 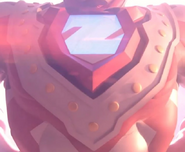 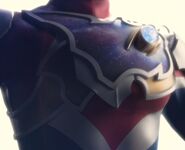