Resident of the Land of Light

TBA
Prometheus (プロメテウス Purometeusu) is a scientist from the Ultra Star and the father of the young Ultra-being named Tran. He appears in the manga Ultra Super Legends, a gaiden to the Andro Melos series.[1]

Prometheus was a scientist in the original ancient Kingdom of Ultra, the head of the information research institute. He was the father of Tran and the first Ultra being that could emit energy beams, and enlarge himself to gigantic sizes. He successfully determined the ancient Earth prophesy of Az-Earth, and was the creator of the Grand Techtor, and later the Cosmo Tector, and the Andro Boat.

While his life seemed prosperous however, several simultaneous earthquakes occurred that released kaiju. These quakes were the work of the leader of the Guar Army's monster forces, Boa. Prometheus' wife was then killed by the Kaiju Gigan. Enraged, Prometheus set out to destroy the entirety of the monster forces, starting with Nokogilin. Seeing this, Boa sent out Gomora to destroy the Andro Boat and the dam network that protected the Land of Light's Plasma Spark energy from escaping. This act would send the Land of Light into darkness and permanently revert the Ancient Ultras to their host's form, all except Prometheus, The Elder and Ultraman Pico (young Ultraman King). Gomora however was too defeated by Prometheus.

Outraged at how Gomora was defeated, Juda killed Boa and went to the Land of Light to face the one that destroyed his monsters. Prometheus dawned the Grand Techtor and faced Juda in combat. However, during the battle between the two, the combined energy of Juda's Bat Calibur and Prometheus' Ecliptic Sword caused an explosion, creating a black hole that absorbed all of Prometheus' inventions and destroyed the Kaiju headquarters. Little did anyone know that this was Prometheus' intension the whole time to send his long-lost son assistance when he would battle a mysterious entity later in his life.

Prometheus's sacrifice saved the Ultra Kingdom, and the legend of Prometheus was long forgotten, only existing in Pico's memory. 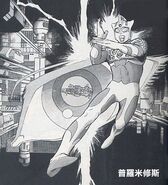 Prometheus and his son Tran