In the near future, a huge meteorite falls onto the Earth, and the tsunami generated by the impact halves the population of the whole world. Mankind starts to recover from there, but eventually, the Earth was dominated by masked men, and thirteen monsters attacked the earth one after another. The monsters seem to be attacking the Earth for some purpose. Millennium, Dark and Elite work together to protect each other and the Earth.

Before the series was to be produced, several stage shows were held to promote the series, notably the Ultraman Live Show 4D.

Before the series was cancelled, a theme park was in the works though construction of the theme park was halted. The giant, now-dilapidated, Ultraman face that had been built at the entrance remained at the abandoned site for some years, though its ultimate fate is unknown.

Poster for a stage show 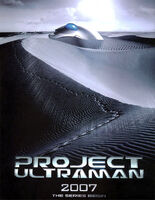 The actors of Project Ultraman

The three hosts, together

A Japanese article about the project 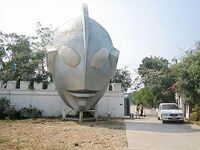 Ditto, circa 2014
Add a photo to this gallery
Retrieved from "https://ultra.fandom.com/wiki/Project_Ultraman?oldid=512209"
Community content is available under CC-BY-SA unless otherwise noted.