New Ultraman Retsuden episode 14 "Burn Leo! The Lion's Eyes Shine!!"
Pressure (プレッシャー Puresha) is one of the aliens that appeared in Ultraman Leo. He appeared in episode 26.

Pressure was an alien magician with vast magical powers housed in his staff. He first appeared in a train yard where he was chased by MAC to a quarry but kept them on a long chase, even into town. He finally ran into a house where, laughing, he frightened the family inside. They tried to hide but using his magic powers, he destroyed objects in the room that were in. Seeking to terrify them further, he waited, but was interrupted by MAC. However, he quickly suspended the family in a magic field, holding them hostage until MAC managed to get through and free them but the alien proved quite capable in combat with his staff and fought them off, managing to escape.

The family was unharmed but clearly and reasonably terrified from the experience. More so, Gen was frustrated by his inability to beat the alien in hand to hand combat. Pressure used his magic to leave smoke high into the air before appearing and unleashing explosions on the surrounding area. He used his magic to levitate houses and throw them around in a bizarre display. He set them down, then conjured fireballs to rain destruction down on the surrounding area. MAC soon arrived to assault him but he used his staff to conjure a purple fog that obscured him from sight, then used his magic to capture one of their fighters and send it crashing into a nearby building.

Waiting for a true challenge, the alien merely spun on top of his staff till Ultraman Leo came to challenge him, managing to disarm him of his staff but Pressure soon regained it and battled the hero, proving to be by far an extremely powerful opponent. His mastery of magic got the better of Leo and he shrunk the hero down to human size before trying to crush him. Shrinking Leo again, this time to the size of an action figure, He taunted the hero before conjuring a balloon and grabbing the hero. He trapped Leo inside the balloon and let it drift into the sky.

Without Leo, MAC was at a loss for how to defeat the seemingly all powerful alien, but a group of children, unknowing Ultraman Leo was trapped inside, popped the balloon, freeing the hero but unfortunately, Ultraman Leo was still left far too small to hope to fight Pressure. Pressure soon appeared again, but before anyone but a kid noticed him, he vanished, seemingly picking this particular child to torment, and doing so with a flamethrower from his staff, causing destruction to the surrounding area.

MAC arrived, Dan carrying Ultraman Leo who was still shrunken. MAC's weapons were powerless before the alien as he stalked the family he'd chosen to torment though a storage yard, issuing his disturbing laughter all the while. Deciding to save his mother, the boy allowed Pressure to see him and chase him. Unable to sit by and watch, Ultraman Leo, even in his tiny state, flew into action, distracting the alien as a bug would a human, but managing to cause the alien some pain but even with Dan's help, the situation seemed hopeless until lightning struck all around the alien and the mythical form of Ultraman King materialized.

Ultraman King had come to aid Ultraman Leo, who he'd be watching and grown impressed with, and used his King Hammer to undo Pressure's curse and return Ultraman Leo to full size. Pressure tried to attack Leo again with a flamethrower from his staff but King presented Leo with the Ultra Mantle, which he used to block Pressure's fire and throw it back by turning it into a umbrella. After he and King stunned the alien with the weapon, Ultraman Leo fired his Shooting Beam while King fired the King Flasher into the alien from his arms. Together, the two attacks proved too much for even Pressure to withstand and the alien magician was finally killed in a huge explosion.

A parody of Pressure, known as Alien Pressure (プレッシャー星人 Puresha Seijin), appears in this film portrayed by Japanese comedian Takashi Okamura, who had parodied the alien prior on Mechaike. Because of Okamura's acting as the alien got him an 'Audition' to be in the Ultra Galaxy movie, with dozens of other monsters and aliens.

In the film, Alien Pressure was one of the hundred monsters and aliens revived by Belial to fight Ultraman, Ultraseven, Rei, his Gomora, and Ultraman Mebius. He is seen watching Alien Metron being killed by Ultraseven, but is never seen after this. 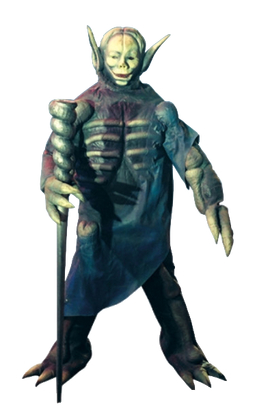 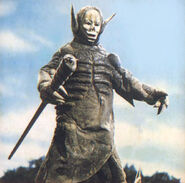 Pressure resting on his staff. 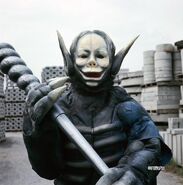 Alien Pressure next to Alien Metron. 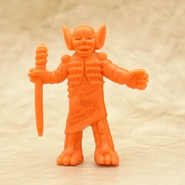