Unknown
The Portals (ポータル Pōtaru) refer to the buildings and the gateways inside them that connect to an alien city, seemingly existing within in the buildings. The city itself, is in fact underground. Each gateway connects to the same city, with the city itself being underground somewhere on Earth. It is home to a myriad of alien from different races. Due to the superhuman abilities of some of these beings and the desire to keep their presence a secret, all crimes committed by aliens are dealt with by the SSSP.

The city exists on Earth itself but in a secure location that not even the SSSP are aware of. The only manner of entrance for humans are transportation gates aptly called Portals. Only Authorized individuals may visit there such as SSSP members. The fact that certain aliens are able to commit crimes on Earth and remain mostly anonymous implies that there may be other ways in and out of the city besides the Portals which are monitored.

There are numerous alien races living in the city, some are humanoid others not so much, what is known is that they all coexist and socialize. Of the species seen many are undocumented but several bear striking similarities to other aliens seen in the Ultraman Series. Among them are possible members of the Alien Icarus, Bell, and Quraso races.

Shinjiro meeting aliens in the city

Moroboshi leading Shinjiro through the city

An alien boxing match in the city 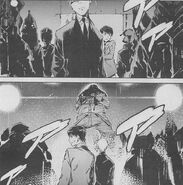 Moroboshi and Shin among several aliens at the boxing match