Return of Ultraman episode 31 "In Between a Devil & Angel"

Redman
Plooma (プルーマ Purūma) is a Kaiju from the TV series, Return of Ultraman. It first appeared in episode 31.

Plooma was a monster used by Alien Zelan as a diversion in his plan to kill Ultraman Jack. After getting Go to separate from MAT, Zelan dispatched Plooma to attack the city in order to distract MAT.

MAT quickly arrived and fired at Plooma with their weapons, but thanks to the monster's thick armor, Plooma was able to shrug off MAT's assaults and continued to rampage through the city. Finally after a scuffle with MAT over the truth of Zelan's plans, Go transformed into Ultraman Jack to battle the monster himself. At first Jack found it difficult to harm the monster as his Spacium Beam couldn't even pierce the monster's hide, but then the Ultra used his Ultra Bracelet's Ultra Spark to decapitate the monster, killing him. Although Plooma was killed, his distraction was a success as Zelan's prime weapon for killing Jack was with his very own Ultra Bracelet...

Plooma reappeared in several episodes of Redman in which he fought the titular hero.

Plooma first appeared in episode 82 of this show, where he teamed up with Gronken to take down the alien hero, Redman. Together, they resisted his attempts to push him down and knocked away his Red Knives. However, Redman refused to give up that easily and fought back against the two monsters, and after giving it his all, the hero kicked down Plooma and stabbed three times in the face with his Red Knife, with Gronken following afterwards.

Figure of Plooma by Bullmark 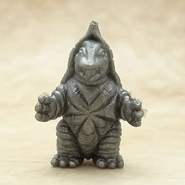 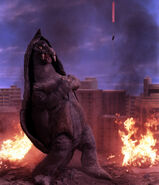