Plazoon was one of many monsters placed in the monster asylum by the U40 warriors. Once the Inbedians hijacked the asylum, they set it toward Earth and released the monsters from their imprisonment. Shortly after this, the Scientific Defense Guard landed on the planet surface they were assaulted by monsters with Plazoon among them and leading the charge. Once Goadarion was destroyed by Ultraman Joneus, Plazoon was sent with Jinario and Groteng to slay the hero with Agujon replacing the monster's position as leader of the defending monsters. With Joneus tired he eventually fell to the three monsters before the Kaiju rampaged through Tokyo. Once Joneus had recovered, Loto and Elek assaulted all three monsters and destroyed them simultaneously by throwing them together and finishing them with their Lotolaria Ray and Elekrium Beam, respectively. 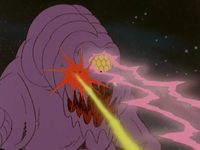 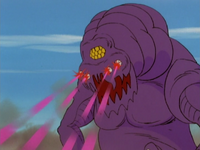