None
Plazma (プラズマ Purazuma), also known as Pluzuma[1], is a Minus Energy Kaiju that is the brother to Minazma. He first appeared in Ultraman 80 episode 49.

All of the negative energy created by mankind had formed many monsters, but all of them were defeated easily by Ultraman 80. The negative energy attempted one last assault in the forms of Plazma and Minazma, who appeared from underground in a mountain region. After UGM could do nothing 80 went into action. The two monsters were using their beams to hold 80 at bay until they decided to go back to back with one another and fuse. While in this fusion, 80 used both the Succium Beam, the Buckle Beam, and even the Ultra Straight Flash with absolutely no effect. 80 was nearly defeated until Yullian revealed herself and assisted 80. The two giants of light used the Double Power, destroying the negative energy's last real chance of defeating 80. 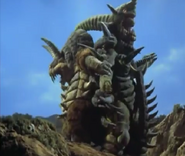 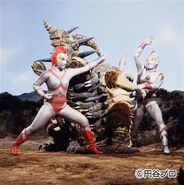