None
The Plant Life form (植物生命体 Shokubutsu Seimei-tai), also known as The Vegetation, was an Earth organism that appeared in the last two Ultraseven EVOLUTION arc.

Born from a regular Earth plant, the Plant Life form was mentioned by the Akashic Records as part of the humanity's future. Alien Garut, an evil alien invader sent the TDF and Ultra Guards a fake copy of the record so that he will use the entity to reform Earth by having Neo Pandon spread the seeds. Despite the Ultra Guard destroyed all of them, one survived, turned into a young girl that raised by an old man whose daughter had died 20 years prior, naming her Mitsuko (ミツコ, Mitsuko). Masaki Kazamori at the same time decided to protect her from his own former companions.

As they headed to the temple that guarded the Akashic records, Alien Garut attacked them but they were saved by Yuki. The trio entered the temple and greeted by the former TDF special forces captain, one of the team that journeyed to the Records along with Yuki, who still did not remember. He explained that Akashic Records showed something different then what Alien Garut had presented and protected the group from Alien Garut at the cost of his life. At his end he passed on the Plant Life Forms within him to Yuki.

As a new human Yuki opened the way for Masaki to get to the Akashic Records which were on a different plane of reality. There he learn that the combination of mankind with a new secondary nervous system (the psychic children) and the plant life forms (as a sort of symbiosis that countered man's aggressive and selfish instincts) were the intended future rulers of the Earth. However, the disturbance caused by the attack of the monster that Alien Garut summoned forced the Plant Life form to shield Yuki from getting killed by the cave debris. That, in turn, interrupted Masaki's interaction with the Akashic Records and brought him back to reality. Masaki found that his allies from the Ultra Guard were under attack. He gave the Plant Life form the copy of the record (a miniature replica of the Evolutionary tree formed from Satomi's writings) and instructed her to give it to Yuki before transforming into Ultraseven to eliminate both Alien Garut and his monster.

The Plant Life form gave Yuki and the rest of the Ultra Guard the record as they finally reconcile. Yuki asked her about Masaki's current whereabouts. She assured her that he will come if they need help. 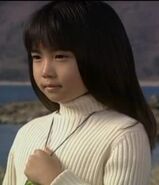 The Plant Life Form as a 7 year old girl.

The Plant Life form and the remaining UG members
Community content is available under CC-BY-SA unless otherwise noted.
Advertisement