Democratic
Planet of Ultra U40 (ウルトラの星 Urutora no Hoshi Yū Fōtī), or simply Planet U40, is the home world of the Ultras from The☆Ultraman.

On the surface the planet resembles an idyllic land of green plains, and sparkling rivers. It appears peaceful and its people simple, dressed in Greek togas, while buildings similar to the Parthenon in Greece litter the surface. However underneath the ground is advanced technology and cities.

The planet appears to be run by a ruling council of elders. How they are elected is not entirely known, if by vote, based on age, or a combination of the two. This council sits over judicial matters as they were the ones who sentenced Heller and his followers to exile. Among the council the Great Sage sits at the top as the most respected leader, and seemingly ultimate authority.

A million years ago, the people of U40 created the Ultra Mind, which gave them the power to transform from humanoids into Ultrahumanoids. They used this power to uphold peace throughout the universe, though one man and his followers decided to use their powers for conquest, abandoning their Ultrahumanoid appearances in exchange for immortality. Defeated, they were exiled to the Dark Nebula by the Great Sage. After that, the Ultra Mind was sealed away inside a hidden hole in space. The Ultras of U40 made enemies with other races such as the Bader Group, Alien Baladon and Alien Scien. 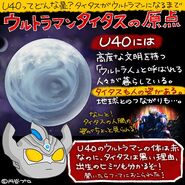 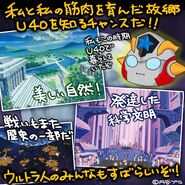 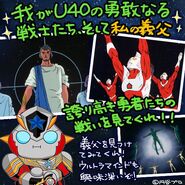