Gai Kurenai (possibly)
Jugglus Juggler (possibly)
Fuma
Planet O-50 (惑星 Wakusei Ō Fifuti) is a planet that is home to the legendary Voice of Light, which resides atop the Crusader's Peak (戦士の頂 Senshi no Itadaki)[1].

A mysterious ring of light was located at the mountain peak called the Crusader's Peak. When Gai and Juggler tried to harness its power, the former was chosen and in turn was transformed into Ultraman Orb in his first form, Origin The First.

After Queen Bezelb was defeated, Gai returned to this planet and his Origin the First form was upgraded to Orb Origin, before flying off to his second mission.

Chapter 3: 'The Man Who Stole The Black Hole' Arc

After Shorty died from defusing the Balloonga Bomb and Juggler and Biranki captured, Gai returned to this planet and received the Orb Ring. Gai also receives his third mission to stop the revival of the Ultimate Lord Monster in Planet Earth.

A long time ago, Grigio and her brothers managed to climb up the Crusader's Peak and were rewarded with Gyros and the R/B Crystals. They were then sent to defeat Leugocyte, the destroyer. However, they lost the battle and crashed down towards Earth as a meteor, in what became known as Ayaka City while Leugocyte drifted away in space.

Ultraman Fuma is an Ultra hailing from Planet O-50, he met Titas and Taiga when they arrived to defend the Warrior’s Peak from aliens who wanted to destroy it. Thus, the Tri-Squad was formed.

Orb visited to Planet O-50 to relieve himself of stress. Before he could, a wormhole opened, and out came Ultraman X Darkness and Ultraman Geed Darkness. The dark copies attacked Orb, who retaliated after sensing darkness from the two. Despite getting the upper hand in his Lightning Attacker and Thunder Breaster forms, he was eventually overwhelmed by the fakes, who started to drain his energy. Fortunately, Ultraman Victory arrived to save Orb. After a brief scuffle, Victory used his EX Red King Knuckle to as a smoke bomb so he and Orb could escape. While the two Ultras made it to the Land of Light, Geed Darkness and X Darkness already succeeded in their mission, meeting up with their creator and using the light energy to create a dark version of Orb. 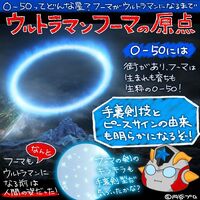