Multiple
The Planet Earth (地球 Chikyū) is the location of many of the Ultraman Series, although it appears in many different continuities. It is for obvious reasons the main setting of most of the series.

It was first brought up in Ultraman Orb and then outright confirmed in Ultraman Taiga that the Earth has four natural Elements; Fire (火 Hi), Water (水 Mizu), Earth (土 Tsuchi), and Wind (風 Kaze), while the Earth's "spirit" is called the Ether (エーテル Ēteru).

World of the Land of Light

After a bizarre outbreak of monsters and aliens happened, a monster escaping the Monster Graveyard, where it was followed by Ultraman, thus setting into motion the events from 1966 to 1967 where the SSSP fought alongside the silver and red giant to defend the planet.

After the Alien Zetton invasion which saw Ultraman defeated at the might of Zetton and needing to be escorted off planet by Zoffy, a chain of events lead to an abundance of alien invasion attempts with Ultraseven and the Ultra Guard fighting against them, until the giant had to leave the planet to return to M78 after fighting against the Alien Ghose invasion.

When Ultraseven left the Earth, the alien invasion and the monsters left the planet in peace. Until the monsters, Takkong and Zazahn surfaced in Tokyo Bay, setting into motion the 'second wave' of monster invasions. Ultraman Jack and MAT fighting them off.

Year after year after year, more monsters and aliens invaded the planet, all the way up until 1980, where after Plazma and Minazma fought the combined efforts of Ultraman 80 and Yullian, Earth finally saw peace. For 30 years, there was no monsters or marauding aliens.

This peace was broken by 2006, where Earth was once again in constant danger from advancing aliens and monsters. After this threat, seemingly, monsters went extinct on Earth, as humanity was now reaching the vast reaches of space.

30 million years in Earth's past, an ancient giant and his comrades fought humanity. One of these giants betrayed his kin alongside two others. The trio was sentenced to a pyramid as punishment. A revival of the ancient giant happened in feudal Japan, where the giant awoke to stop a yokai from destroying several villages.

Fast forward to the 21st century, when the giant, Tiga, was awoken to fight off the marauding Golza and Melba. Throughout his time protecting the Earth, Tiga teamed with GUTS, and toward the end of the journey, fought the Darkness. At some point, the three dark giants revived and challenged Tiga once again.

Years later, a second giant appeared, seemingly filling the position that Tiga had left. Fighting the Spheres, Earth was in a constant state of siege. Dyna then fought the Alien Monera, with the help of a spiritual stand-in of Tiga himself. Dyna would then fight the Arwon monster, sent by Dehadoh aliens.

World of Side Space

In Ultraman Geed, a universal bomb detonated by Ultraman Belial was set off on Earth, devastating the planet. The shattered Earth served as ground zero for Crisis Impact, an apocalyptic event that almost brought about the end of the Universe, until everything was restored by Ultraman King, who gave up his corporeal form through the creation of Childhood Radiation to serve as a 'host' for the universe, preventing its annihilation.

The most dominant species though are humans. Other non-monster species include the Nonmalt, Underground People, Ultras, and Victorians. Ultras are usually stationed on Earth by their home planets to defend Earth from monsters and alien attacks. In addition, a wide range of aliens from other planets have chosen Earth to be their home, and live on the planet either peacefully, or while preparing plans for a wider invasion led by their people.

Army of the Apes

Multiple of each species are seen through out the series. 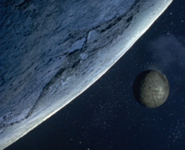 The Land of Light about to collide with Earth in "Battle! The Leo Brothers vs. the Ultra Brothers!"

Earth as seen in Ultraman: Towards the Future 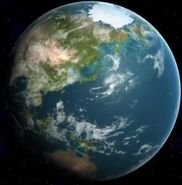