Natives of the Planet Apple, these chicken-like Kaiju were seen pursuing Oni-on when he stole one of their apples to eat. They forced him to flee the planet until Autumn. 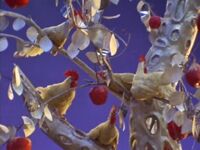 A flock of Apple Planet Chickens.
Add a photo to this gallery
Retrieved from "https://ultra.fandom.com/wiki/Planet_Apple_Chicken?oldid=512145"
Community content is available under CC-BY-SA unless otherwise noted.