None
The Pirates of Flames (炎の海賊 Honō no Kaizoku) are a wily crew of hostile pirates that sail throughout the galaxy, they often stop for rest at a place known as "The Space Nitro-methane Sea."

The background of the Pirates of Flames was unknown, other than the fact that Garu's branch of the faction befriends Glenfire for quite some time. Despite their reputation, the Pirates of Flames opposed Ultraman Belial's Legionoid army, leading them to establish an alliance with Ultraman Zero and his companion against a common enemy at The Space Nitromethane Sea. Unfortunately, both groups were forced to go on separate ways as soon as Zero won their respect, as Darkgone's forces unexpectedly appeared to destroy them. In the ensuing battle, Glenfire dangerously ignites the surrounding Nitromethane while Garu and his crew retreated, destroying Darkgone's fleet in the process.

The Pirates of Flames, alongside the rest of their group's branches later arrived in with a fleet alongside many others to aid Zero and co. in defeating Belial's forces and saved Planet Esmeralda. Ultraman Zero The Movie: Super Deciding Fight! The Belial Galactic Empire 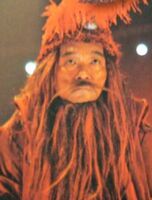 The Advant Garde along with other Pirate of Flames ships

The Advant Garde in battle

Retrieved from "https://ultra.fandom.com/wiki/Pirates_of_Flames?oldid=512139"
Community content is available under CC-BY-SA unless otherwise noted.