The origins of the Pikari Brusher are unknown, but it is safe to assume it originates from the Land of Sparkles. After the first movie and before the second, it was replaced with the Pikari Brusher 2 which performed the same functions.

Katsuto quickly brushes his teeth and raises it into the air and shouts "Zearth" like the Beta Capsule to transform into Ultraman Zearth.

Katsuto using the Pikari Brusher
Add a photo to this gallery 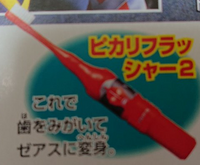 Retrieved from "https://ultra.fandom.com/wiki/Pikari_Brusher?oldid=512134"
Community content is available under CC-BY-SA unless otherwise noted.